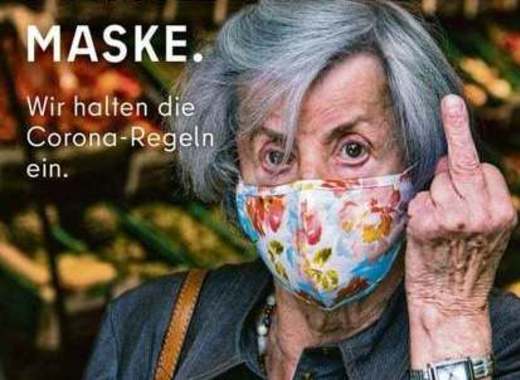 It has proven hard for local authorities in the German capital of Berlin to convince their constituents that they should be wearing masks and obeying all the rules meant to prevent the spread of COVID-19. Thus, with cases on the rise, the city’s government has decided that it’s time to stop playing nice and grab the attention of rule breakers in a more creative and aggressive way.

Thus, developed jointly by the Berlin Senate and Visit Berlin, the new campaign for promoting the adherence to coronavirus restrictions was launched – and it immediately drew the ire of some citizens. Displaying an elderly woman giving the middle finger to those not wearing a mask, the poster immediately became controversial and gathered attention online.

And that is precisely what the government was aiming for, according to Christian Tänzler, spokesman for Visit Berlin, who explained that the entire point of the campaign was to provoke a reaction and to garner attention. Using an elderly woman, who is a representative of a high-risk group and is thus more concerned about rule-breaking in order to achieve maximum effect was exactly what the entire campaign is about.

And instead of being deterred by the backlash, Berlin’s local government has been galvanized. According to authorities, this is just the beginning. According to Christian Tänzler, several more similar campaigns will follow until the end of March.

By relying on attention-grabbing ads, the city of Berlin hopes that it will be able to get through to those who insist on not taking the rules into account. So far, the first part of the plan has been a success – but whether an old lady flipping the finger will convince anyone of the virtues of wearing a mask, however, remains to be seen.