The cathedral is an exquisite example of Gothic architecture 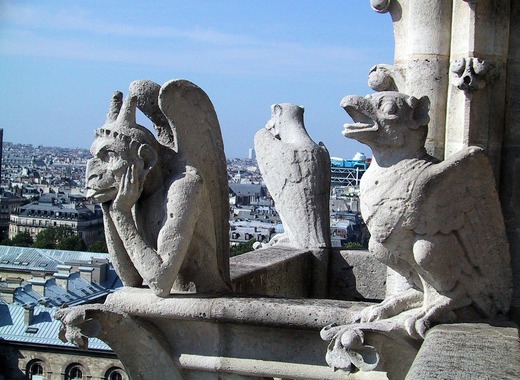 The Notre-Dame Cathedral in Paris was built in the Middle Ages and is one of the most prominent examples of Gothic architecture. Its construction started in 1160 and went on for about 200 years. But a lot had changed in terms of architectural style for 200 years. Many figures were carved in its walls, both outside and inside, among which are saints and prophets but also, influenced by the Gothic style, many fascinating creatures such as the gargoyles.

What are the gargoyles? They are mythological creatures, monsters to be precise, whose heads were nailed to walls to serves as water fountains. By 1345, the cathedral featured about a dozen monsters. It is curious to point out that these statues of the mythological creatures were actually tightly connected to the drainage systems of the cathedrals - they were used to carry off water and very often had to be replaced with new ones.

In 1800s, many Parisians voted for the demolition of the cathedral but thanks to France's most celebrated author - Victor Hugo - it was spared the destruction. But as the cathedral was aging, in 1844, architects Jean-Baptiste-Antoine Lassus and Eugène Viollet-le-Duc, ordered the restoration of it. They added some 56 new statues - chimera, such as animals, fantastical hybrid creatures, and mythical monsters.