The famous Bulgarian “Atlantic” Trabant, which “kidnapped” the then Secretary General of NATO Manfred Wörner has been replicated in the new HQ of NATO in Brussels 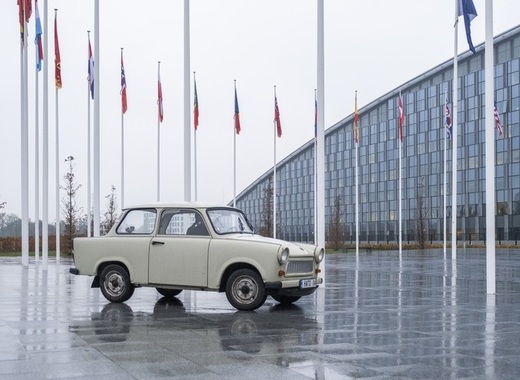 The famous Bulgarian “Atlantic” Trabant, which “kidnapped” the then Secretary-General of NATO Manfred Wörner in Sofia in 1991, has been replicated in a permanent art installation in the new HQ of NATO in Brussels. The art project includes also two segments of the Berlin Wall and a 9/11 relic from the Twin Towers in New York to symbolize the first time NATO invoked Article 5.

The Trabant in the HQ symbolizes the 2004 Big Bang enlargement of NATO with Bulgaria, Estonia, Latvia, Lithuania, Romania, Slovakia, and Slovenia. It is a replica of the original Trabi, a symbol of Bulgaria’s journey to NATO, which is on another permanent exhibit — at the National Military History Museum in Sofia, since 2015.

In addition to the biggest global relative increase in military spending for 2019 offered by the Bulgarian Government to the allied security, the Trabi, donated by the Atlantic Club of Bulgaria, contributes to humanizing the ambiance in the Alliance’s defense and invites visitors from all over the world to learn in the spot more about the noble goals of the Alliance.

The Trabant, placed atop yellow tiles, a trademark of the City of Sofia, gives visitors a real sense of the spirit of the Bulgarian capital.

But why a Trabant and what does it have to do with the NATO—Bulgaria karma? In order to answer that, we must look some 30 years in the past.

Bulgaria’s Atlantic Trabant (commonly referred to as “Trabi”) first rose to prominence back in June 13, 1991 – thanks to footage by CNN. On that date, Dr. Solomon Passy (Founder and President of the Atlantic Club in Bulgaria and later the country’s Foreign Minister who negotiated its membership in NATO) used his mother’s Trabant to symbolically “kidnap” NATO Secretary-General NATO Manfred Wörner during the first visit of a NATO SG to Bulgaria.

The Atlantic Trabi-ride thus became a tradition for visiting VIPs and paralleled the history of NATO—Bulgaria's new relations. This story began with an August 8, 1990, Parliamentary speech by Dr. Passy MP who advocated for dissolution of the Warsaw Pact and Bulgaria’s accession into NATO and was crowned on April 2, 2004, when Minister Passy raised Bulgaria’s flag over NATO HQ in Brussels.

The NATO HQ is a milestone for the history of the Atlantic Club of Bulgaria — the NGO which spearheaded the accession process of Bulgaria. In November 1990, on the invitation of NATO SG and the US Permanent Representative to NATO, Dr. Passy led the first-ever parliamentary delegation coming from a Warsaw Pact country to pass the threshold of NATO HQ. The delegation informed the Allies about the expected birth of the Atlantic Club of Bulgaria — the only pro-Atlantic NGO ever existing on a Warsaw Pact territory, which triggered the Atlantic movement in New Europe.

Over the next few years, international officials continued interacting with Bulgaria’s signature Trabant, including NATO Secretaries-General.

But perhaps one of Trabi’s most notable celebrity interactions was when it was blessed by Pope John Paul II himself, during his visit to Bulgaria in May 2002.

Retiring in a blaze of glory

For its long years of service, Trabi was awarded with a comfortable retirement in 2015. The car was donated by Dr. Solomon Passy to the National Military History Museum in Sofia to commemorate the 25th anniversary of the establishment of the Atlantic Club in Bulgaria and the Atlantic Movement in New Europe.

Today, in 2020, Trabi is back in the spotlight, being placed on top of the specially installed yellow tiles which surround the Parliament Building in Sofia – the same ones that Trabi had traversed so many times throughout its years of service. Bringing another piece of home to Brussels, Trabi cures homesickness with an injection of globalization.

The article was prepared in collaboration with Angel Apostolov from the Atlantic Club in Bulgaria.