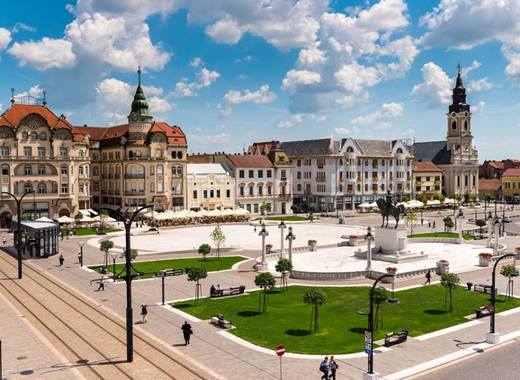 Oradea, a city in western Romania, has attracted EUR 14.2 million for 5 projects submitted in the Interreg Romania – Hungary Program. The projects target the development of infrastructure for local entrepreneurs, the endowment of local hospitals and the improvement of public transport. The city will contribute 4.6 million to these projects.

One of the projects, with a total value of 7.5 million, entails the construction of an entrepreneurship center, of a mobile center to support local producers and of the inclusive entrepreneurship center. It was submitted in a partnership between the Bihor authorities and the City Hall of Hajdúböszörmény, a town in northeastern Hungary.

Three other projects will be developed in the healthcare sector. One project entails the establishment of interconnected healthcare services in Oradea and Bekes county, in Hungary, and the endowment of the Gavril Curteanu Hospital in Oradea and the Békés County Hospital with modern medical equipment. The Oradea hospital is set to receive medical equipment for its radiology, and adult and child surgery departments. A test lab with a vacuum transport system for lab and drug samples will also be set up. A telemedicine system, with terminals in the hospital’s ER rooms is also part of the project. The system will also allow exchanges between the medical staff of the two partner hospitals.The total value of the project is of 2.9 million, and the budget alloted to the Gavril Curteanu Hospital amounts to 2.45 million. Of this, 2.4 represent non-reimbursable funds, while the contribution of Oradea stands at 49,111.

In another project, the Oradea County Emergency Hospital will partner with the Gróf Tisza István Hospital in Berettyóújfalu and Hajdúböszörmény for the early detection and treatment of illnesses in the Bihor – Hajdu Bihar Euro-region. The total value of the project is 3 million.

A third project in the healthcare sector will be developed by the Timişoara Cardiovascular Diseases Institute in a partnership with the Oradea County Emergency Hospital and the University of Debrecen. As part of the project, the Timişoara institute will receive equipment for pediatric cardiovascular surgery, a specialty currently not covered, while the Oradea hospital will see its gynecology section revamped, from the OR to the Intensive Care Unit and the rooms. Exchanges between the medical staff and screening actions to identify cardiac fetal defects and ovarian tumors are also part of the project.The total value of the project is of EUR 3 million.

A fifth project targets the improvement of the public transport in Oradea and Debrecen. As part of the project, Oradea will purchase seven new, Euro 6 buses. At the same time, several surveys will be done regarding the flux of commuters in the localities of Oradea, Borş, Sâmnartin and Biharkeresztes, and ways to develop the public transport. The Oradea Transport Company will also purchase an automated system for tracking vehicles, 50 information panels for passengers, and a mobile app tracking in real time the trips between the four localities. The total value of the project is of EUR 2.9 million.