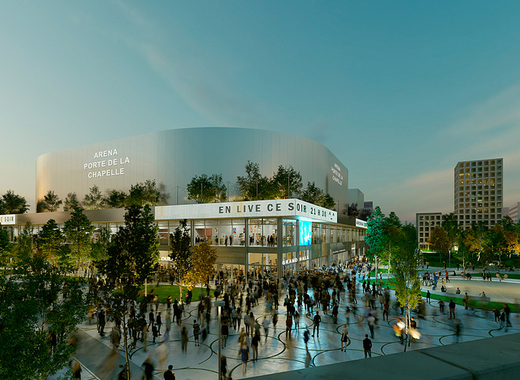 The city of Paris has selected the group which will oversee the design, construction and the technical operation of its future sports arena Porte de la Chapelle, announced the local government earlier this week. The facility will host the badminton, para-taekwondo et para-badminton events, part of the 2024 Olympic and Paralympic games.

The group led by Bouygues Bâtiment Île-de-France was selected on May 25 to transform the former parking lot into an emblematic sports facility. Together with the architectural agencies SCAU and NP2F they were awarded the contract by the Tender Commission of the city of Paris.

The arena will have a capacity of 8000 places and is expected to significantly contribute to the development of high-performance sports. It will host major sporting events, including those part of the Olympic programme, as well as concerts, shows and conferences once the forum is over.

Furthermore, the facility intends to be open to the locals and the residents of the neighbourhood. The arena will respond to their needs of sport and entertainment through two gymnasiums, additional 2,600 m2 space dedicated to leisure and shopping.

The Arena will be located in a new mixed neighbourhood between the gates of the Chapel and Aubervilliers, with the creation of the ZAC Gare des Mines-Fillettes. It is expected to open in 2023.

The winning project was selected based on its architectural, landscape, functional and environmental qualities as well as its commitments in terms of energy performance and the quality of its maintenance program.

The solid and windowed parts of the building will ensure comfort, high acoustic performance and energy savings. The greening of the roofs, the wide use of biobased materials will contribute to its high energy performance.

Some 30% of the concrete used for construction will come from low-carbon sources, which reduces greenhouse gas emissions. The Arena will also house an urban cold production plant that uses local geothermal energy.

This installation will make it possible to supply all of the Arena's needs in cold and heat by using 100% renewable energy. The new generation equipment will thus reach unparalleled energy performance, consuming 3 times less than a traditional arena.

The design-production price of the Arena Porte de la Chapelle is estimated at € 98 million excluding taxes. The first half of the funding will be provided by SOLIDEO (A company for the delivery of Olympic works), with contributions from the City of Paris, the State and the Île-de-France Region, and the other 50% will be supplied by Paris's own budget. In addition, the French capital will finance the design-production the two gyms for an amount of € 20 million and the program of local activities, leisure centres and shops worth € 7.2 million.