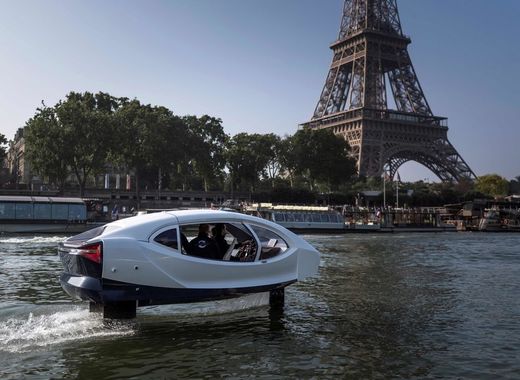 A French company aiming to beat commuter gridlock with futuristic water vehicles has tested its flagship ‘flying’ SeaBubbles taxi cab on the River Seine. Following a wrangle with authorities last year, the tech firm finally took to the water in the French capital. The SeaBubbles is part marine-machine and part avian-car, with the bizarre-looking vehicle capable of rising 70cm above the water. It’s doors are like miniature gull wings, while it is propelled by electric battery system.

The vision behind the invention is to open up waterways to eco-transport and reduce pollution caused by the millions of cars on the planet. When the Bubble reaches 10 km/h, it rises and begins to fly, avoiding seasickness, sudden movements or rolling waves. Once the flight is over, the Bubble slows down, lands on the surface of the water to dock, allowing passengers to get out.