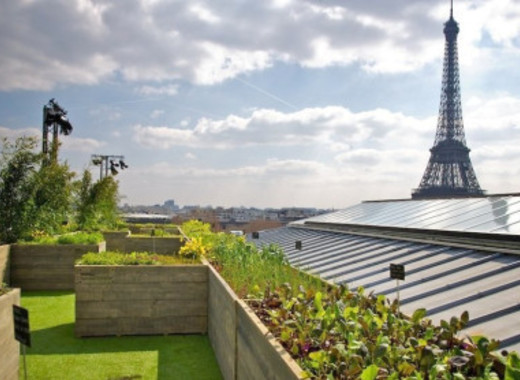 Anne Hidalgo, Mayor of Paris has the intention to improve the city's green spaces. Hidalgo has made good on her initiatives, and both private and public enterprises have risen to the challenge of making Paris rich in biodiversity as well as cultural capital. In 2016, the city launched Parisculteurs - a campaign that is working to cover 247 acres of rooftops and walls in Paris with greenery by 2020. One third of that greenery will specifically be set aside for urban farming. To date, 74 organizations have signed a charter to work with the city on planning this enormous enterprise. The city has already approved 75 projects for development, which are estimated to produce more than 500 tons of vegetation.

Parisculteurs will serve as an innovative model for other cities who are reconsidering how an urban landscape can incorporate more of the natural world. Paris not only intends to produce fruit and vegetables but also plans to invent a new urban model . Citizens want new ways to get involved in the city's invention and be the gardeners. For example, La Chambeaudie Farm, a project run by agriculture start-up Aéromate. The 5,380 square-foot farm is located on top of a medical center owned by the Paris Metro.