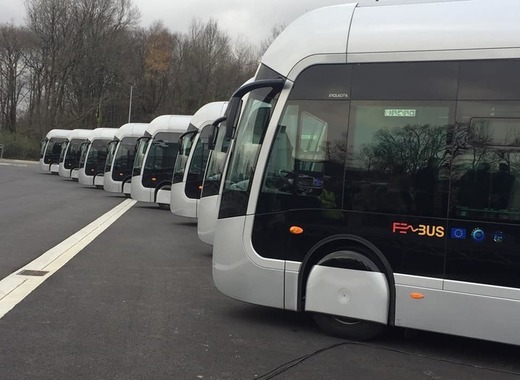 The latest innovation in the transport system of Pau is already a fact: as of December, the French city boasts a 100% hydrogen powered high-level service bus circulating in its centre. The transport company Keolis operating the urban public transport network of Pau Béarn Pyrénées Mobilités for 20 years presented Fébus on 17th December.

Keolis will be providing technical assistance for the operation of eight hydrogen-powered high-level bus services (BHNS). These vehicles will be circulating on the line between the François Mitterrand hospital, in the north of the city, and the Pau station, in the south, covering some of the busiest city areas. The total distance of the route is 6 kilometres which will be covered for 17 minutes with a vehicle every 8 minutes.

Built by Belgian manufacturer Van Hool, these vehicles produce their electricity onboard, making use of a hydrogen fuel cell. The hydrogen used to supply the vehicles with energy is produced in the station built near the IDELIS bus depot, located in Pau. One of the biggest advantages of these hydrogen buses is that they do not emit any pollution- neither noise nor atmospheric as their operation is not associated with greenhouse gases since they only use water. Furthermore, the vehicles are highly autonomous – with a capacity of 240 kilometres per day, they can easily be recharged during the nights when out of service.

However, the innovative solution is much more than a modernization of the local transport, albeit it certainly makes it all the more attractive. In fact, Fébus is first worldwide 18-meter BHNS service, powered entirely by hydrogen.

Keolis, a historic partner of the Société de Transport de l'Agglomération Paloise (SPL STAP), has already demonstrated its commitment to alternative energy and sustainable development: earlier they launched electric high-level service buses in Amiens and Bayonne-Anglet-Biarritz. Today, they contributed, by way of their technical assistance, to the reduction of the carbon footprint of Pau.