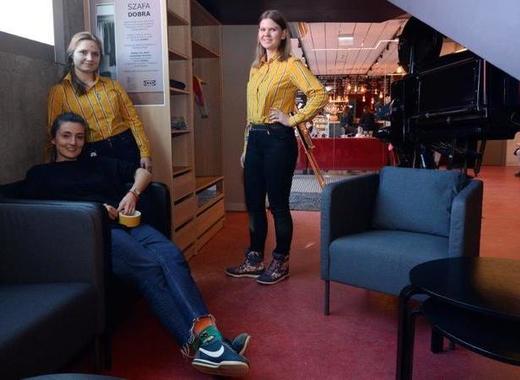 A cooperation between Gdynia Film Centre with IKEA Gdańsk gives a second life to clothing. It rose on a very mundane occasion: the presence of a wardrobe, which just stood in the cinema building. The latter will now be used by Gdynia for clothes exchange, so as people could give away unused clothing and thus help those in need. The clothes collection has already started and will last until the end of March.

The idea behind Good Wardrobe (Szafa Dobra) is to help people do something good for others and for the planet, as many clothes end up in the garbage or unused, despite being in perfectly wearable condition, thereby creating excessive waste for the environment. Collected in this way, clothes will go to the Gdańsk Foundation DROGA, which will take care that the most needy receive it. “We have been involved in intangible assistance for people who have been in need for over 15 years… All donors can be sure that their gifts will be given to the needy, because we permanently cooperate with centres for the homeless, Houses of Single Mothers, or MOPS. There is a huge number of people in need and we will certainly manage to allocate all the gifts - says Tadeusz Len, President of the Board of the DROGA Foundation.

“Those who relate to the idea of ​​responsibility for our planet and the so-called sharing economy, will be able to bring unnecessary clothes, arrange them in our closet and in this simple way give them a second life and help those in need. This action will bring a lot of good, I'm convinced - says Patrycja Krogul, local IKEA marketing manager.

The Gdynia Film Centre located in the heart of the city is an ideal place for such initiatives. This place is known and liked by many as it offers film attractions for people of all ages. In addition to providing help, Szafa Dobra draws attention to another social issue. It's about accumulating excessive amounts of things, most of which we do not use anymore, but we keep in case they should be useful.

Inhabitants of Gdynia, who want to slim down their wardrobes have until 31 March to bring unused clothes in good condition.