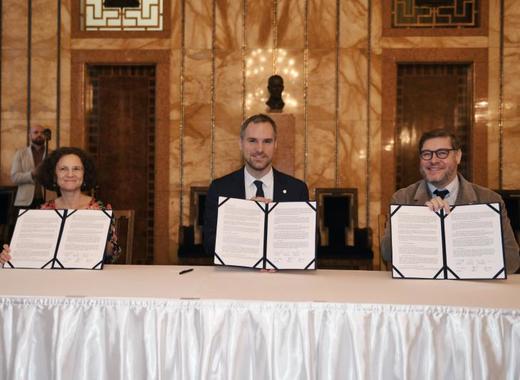 The City of Prague has joined the world's metropolises which actively approach the fight against the HIV/AIDS epidemic, announced the municipality on Sunday. The memorandum with the Fast-Track Cities initiative was initiated by Health Councillor Milena Johnová and Mayor Zdeněk Hřib who signed the memorandum on behalf of the Czech capital.

“I am glad that Prague will join other world capitals in the fight against AIDS. With Fast-Track Cities, we can say: together we are stronger, together we are louder, together we can change the world. The health of our citizens is a priority for us, and we must not underestimate it,” said Mayor Zdeněk Hřib, quoted by praha.eu.

The adherence of Prague to the Fast-Track Cities initiative will potentially make financial resources available to organizations combatting HIV and other infectious diseases such as TB and chronic hepatitis B and C. In addition, Prague plans to ensure permanent access to quality testing, the elimination of stigmatization and discrimination related to HIV and other infections, close cooperation with experts, vulnerable groups and public health authorities, healthcare facilities and the police.

The incidence of HIV, as measured by the number of newly diagnosed cases in individual years, has been an upward trend in the Czech Republic, with a significant increase in the number of newly diagnosed HIV-positive people since 2012, we read on the municipal portal. From the beginning of monitoring in 1985 to the end of 2018, 3,368 HIV-positive patients were diagnosed in the Czech Republic, of which 1,651 in Prague.

Finally, the actions to be undertaken by Prague aim to eliminate the fear of HIV testing and the stigmatization and discrimination against HIV-positive citizens. The accession of the City of Prague to the Fast-Track Cities initiative is also a commitment to regularly monitor and evaluate the course and results of individual measures, provide data and annually inform partners.