The nano-polymers could prove much more effective at disinfecting surfaces 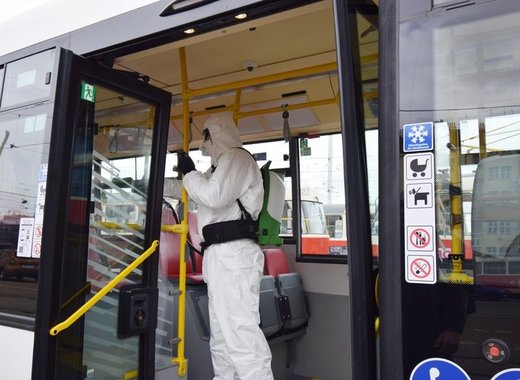 The Czech Republic is testing a new way to disinfect public transport, in relation to the ongoing coronavirus pandemic, Prague Public Transit Company (DPP) reported. The nanotechnology is believed to be much more effective than conventional detergents and disinfectants.

As of Tuesday 10 March 2020, the nanotechnology is being tested in the Czech capital Prague. Two 15T trams and one SOR NB 12D bus have been sprayed with nano-polymers. Two different disinfectants, which are based on the ability of nano-polymers to destroy bacteria, viruses, yeasts, moulds and other microorganisms will be tested for two weeks.

The tests will be carried out as part of the regular movement of the transport vehicles after which DPP officials will decide whether it provides the expected results based on microbiological analysis.

Once it is decided if the traditional or the nano disinfectants work better, all public transport vehicles and subway stations in the capital city will be sprayed this way.

According to Czech officials, the ordinary disinfectants have a limited time efficiency form the range of minutes or hours.  Meanwhile, nano-polymers can work for up to three weeks. This might prove essential in combating the COVID-19 outbreak and limiting the chances of dissemination of the disease further.

In addition to their effectiveness, efficiency and durability, the nano-based sprays are non-flammable, stable, water- and alcohol-soluble, colourless, fragrance-free, do not endanger human or animal health or safety, do not irritate eyes or mucous membranes or cause allergic reactions, explains DPP.

A state of emergency in Czechia

By the time of writing this article, Czechia has officially 116 confirmed coronavirus positive cases (as of 7/13/20, 7:30 AM). Yesterday 12 March the Czech Government declared a state of emergency and prohibited all events and gatherings involving more than 30 persons. It is valid for 30 days.