President of the European Parliament, Antonio Tajani, held a meeting at Sofia University

The President was answering questions for nearly two hours 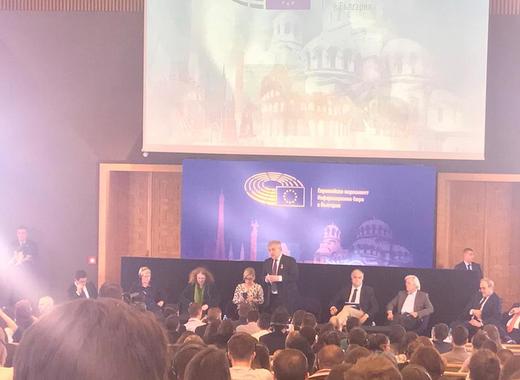 Antonio Tajani, President of the European Parliament, held a meeting in the University of Sofia as part of his visit to Bulgaria on the issue of the Bulgarian Presidency of the Council of the EU next year. He met with students from various schools and higher education institutions to answer their questions about the future of the EU.

The meeting was opened with a discussion that fighting illegal immigration and unemployment are just some of the important tasks of the EU, but it also has to focus on forming and strengthening values. Focal points in the speech of the President were strengthening the connection between university education and business, digitalization and the budget of the EU.

The meeting was open for students, who had the chance to ask the President what concerns them, share their opinion of how they see the European Union, and discuss the advantages of membership. Several other representatives of the European Parliament also participated in the discussion and answered all questions posed by the audience.