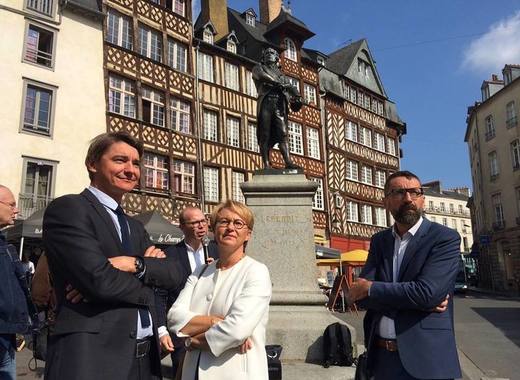 The repetitive manifestations which have taken over several French cities during the last four months have had particularly negative consequences for small business operating in the city centre. The City of Rennes estimates that those massive assemblies, having turned violent on multiple occasions, have led to spoiling the attractiveness of the centre as a shopping destination, thereby putting local shop owners into great difficulties.

In search for means to offset these processes and to provide compensation, the local authorities have been engaged in continuous dialogue with local shop owners and representatives from the trade sector. As a consequence, Rennes City and Rennes Metropolis have implemented several measures, such as free transport tickets: since the beginning of the winter sales, 15 000 such have been sold and 15 000 hours of free parking in the centre provided. However, the persistence of protests every Saturday has decreased the efficiency of these attempts, which led to the French government announcing additional measures in support of local commerce. It was made clear that the French ministry of Economy will provide 3 million euro to fund commercial events in ten cities, including Paris. As for the local authorities of Rennes – the City and Metropolis, in coordination with Carré Rennais, the Commercial Union and the Chamber of Commerce and Industry of Rennes will introduce measures amounting to half a million euro for exceptional activities during spring.

What they consist of? The City of Rennes is set to:

Furthermore, Rennes Metropolis is committed to providing four free Saturdays on the entire STAR network. Finally, on top of this many cultural and sport events that will animate the city centre of Rennes will be organized, accompanied by communicational activities having the objective to underline the attractiveness of the shopping in heart of Rennes - first commercial centre of Brittany.