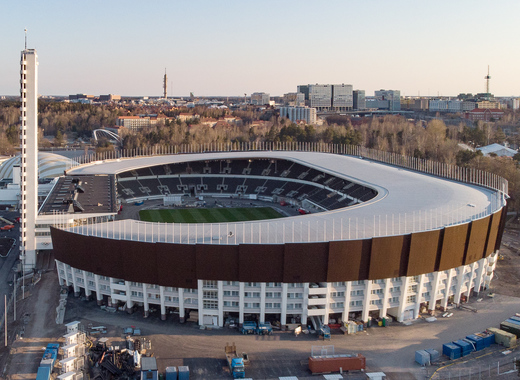 Renovation works on the Helsinki Olympic Stadium have received the prestigious Finlandia Prize for Architecture in recognition for the efforts of the companies involved in the project to maintain the historic aspects of the building while simultaneously bringing it forward towards modernity.

The Prize itself is an award that places a special emphasis on the historic significance of Finnish buildings. It aims to recognize the efforts of companies engaged in renovation in keeping those historical aspects in mind when approaching such massive and important projects.

The Helsinki Olympic Stadium – a point of pride for locals

The stadium is the largest of its kind in all of Finland. It was built in 1938 in preparation for the 1952 Summer Olympic Games, after which it has mostly been used to host different sports and cultural events.

The venue was closed some four years ago in order to undergo renovations and was finally reopened this August. The Stadium also greeted its first large-scale event, the Helsinki Design Week, earlier in September, heralding a new age for the historic edifice.

The awarding of the Finlandia Prize of Architecture took into account the magnitude of the task of renovating the massive stadium. In a press release, Paula Vesala, the actress, singer and songwriter who ultimately chose the winner highlighted the efforts of the designers in adhering to the vast array of needs of the diverse groups of users who frequent the establishment – while simultaneously preserving its historic spirit and adding even more brilliance.

The renovation efforts were undertaken by two architectural firms, K2S and Architects NRT, with architects Kimmo Lintula of K2S and Kari Raimoranta of NRT as the main designers. Over the last few years, they worked closely alongside the Finnish Heritage Agency to bring the Stadium back to its former glory.

With the venue classified as a protected building under Finnish law, their joint work has been instrumental in preserving its historic significance. Together, they have managed to complete a monumental task that citizens and visitors of Helsinki will be able to marvel at for decades to come.