Renovations of the Vukovar Water Tower near completion

Scarred by war, the water tower is one of Croatia’s most important symbols of unity 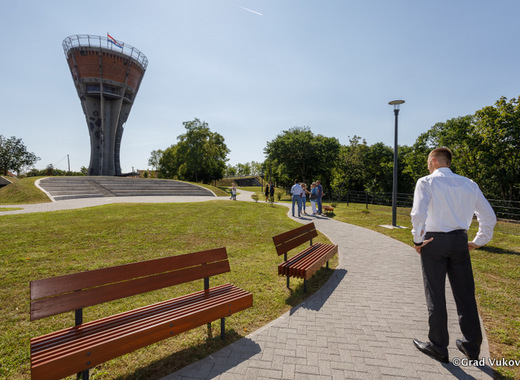 The Vukovar Water Tower is one of Croatia’s most famous and recognizable landmarks. Prior to the outbreak of the Croatian War of Independence, at its top, it hosted a restaurant and café, overlooking a large park, with a view of Vukovar, Dunav and the nearby vineyards. During the war, however, it was heavily bombarded by artillery fire during the Battle of Vukovar, getting hit over 600 times, leaving it a mere shell of its former self.

Following the end of the war, authorities decided that rather than returning the tower to its past self, it should instead be preserved in its current damaged state as a tribute to those who gave their lives for a free Croatia and to the suffering of the residents of the town of Vukovar.

Over the last couple of years, however, local officials have been making improvements to the grounds of the historical site in an effort not only to preserve it but also to popularize it and make it a more attractive tourist destination.

"The view from the proudest place in Croatia is worth 46 million kuna, and it was provided to us by almost 7,000 Croats around the world. Individuals, companies and associations from literally all continents and from a large number of countries joined the action of raising funds for the reconstruction of the Vukovar Water Tower - a symbol of Croatian unity,” stated the mayor of Vukovar, Ivan Penava.

Reconstruction works are being carried out in three separate phases. The first phase includes a reconstruction of the water tower itself as well as the creation of appropriate parking spaces for cars and buses. It is scheduled to be completed by 1 October 2020.

The finishing touches on the 2nd phase were put on 25 September 2019, throughout which additional facilities surrounding the Tower were erected -a children’s playground, a café, public toilets, as well as an auditorium overlooking the Danube. During the third and final phase of the project, the interiors of the facilities created throughout the two previous periods will be redesigned and geared up with state-of-the-art equipment.