Restoration of Cork’s Shakey Bridge is over

The only surviving pedestrian suspension bridge of its type in Ireland has undergone a EUR 1.7 million makeover 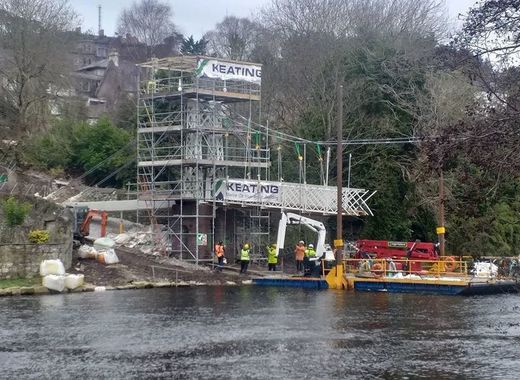 Restoration & repair works were undertaken to address extensive corrosion and damage to the 50.9 m long heritage structure. According to Cork City Council, Daly/Shakey Bridge is the only surviving pedestrian suspension bridge of its type in Ireland.

Shakey Bridge got the EUR 1.7 million makeover in preparation for its 100th birthday. Built in 1926 to replace an old ferry crossing and opened a year later, the bridge was constructed in London by David Rowell & Company to the design of Cork City engineer Stephen Farrington. Spanning River Lee, it remains the only suspension bridge in Cork city, linking Sunday’s Well with Fitzgerald’s Park and the Mardyke and providing pedestrian access to the nearby University College Park.

The bridge was officially named after Cork businessman James Daly who paid partially for its construction but came to be widely known among future generations as the Shakey Bridge. According to local historians, the bridge owes its nickname to the fact that crowds of people used it to reach Mardyke for regular GAA matches causing the structure to shake vigorously.

Constructed of wrought iron with a timber planked walkway, the bridge is suspended between two steel lattice towers on either bank of the river. During the makeover the suspension cables were replaced, the lattice towers were repaired and repainted and so was the lattice deck.

The reconstruction work also involved the upgrade of the approach ramps and the installation of new public lighting. Staying true to its nickname, the Cork city suspension bridge will be up to some serious shaking for the coming Easter.