His name is Mārtiņš Staķis, the leader of the "Development"/For! /"PROGRESSIVE" list 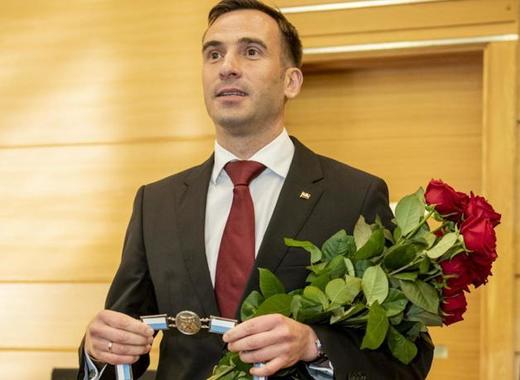 Today, following a secret ballot, the members of the Riga City Council elected Mārtiņš Staķis, as the new mayor of the Latvian capital – Riga. This comes after more than 7 months the mayoral seat stayed vacant in what has shaped to be a protracted political saga marred by corruption scandals, dismissal and delays of elections due to the Covid-19 pandemic.

Mārtiņš Staķis is the leader of the "Development"/For! / "PROGRESSIVE" coalition, a new entity on the political landscape of Riga, which won 26.14% of the votes, giving the chance to lead the negotiations on forming a coalition government.

The failure to capture a majority in the elections held 26-29 August meant that the winning party had to opt for forming a broad coalition. The new larger coalition was finally agreed on 30 September and it consists of the following parties: Development/ For! / Progressive party, New Unity, National Alliance/Latvian Association of Regions and the New Conservative Party.

The new mayor was confirmed with 46 votes in favour and 11 votes against.

“During the pre-election period, I called on all Rigans to go to the polls and vote. Even if they wanted to vote for someone else. Now I can promise that I will be the mayor of all the people of Riga. I will not have our own and others, we all live in our city, we are patriots of Riga, and we all want the city to be rich, friendly to life and ready to help those who need it,” said the new mayor in his first official speech.

It was agreed that the Coalition for Change will have its own cooperation council which will meet after each City Council meeting to discuss matters. Each of the partners can submit proposals and decisions have to be taken unanimously. The motivating force behind the coalition partners is the need for profound changes.

“This means Riga, where corruption is no longer possible, and where the work is being done properly. A city that is dynamically developing and offers modern solutions in all areas - from attracting investment to planning traffic infrastructure and ending with the reduction of queues in kindergartens. We have been elected because we are expected to do practical work for the benefit of the people of Riga,” concluded Mayor Staķis.

The mandate of the new Riga City Council will last 5 years, instead of 4, due to the legislative changes that were adopted back in February.