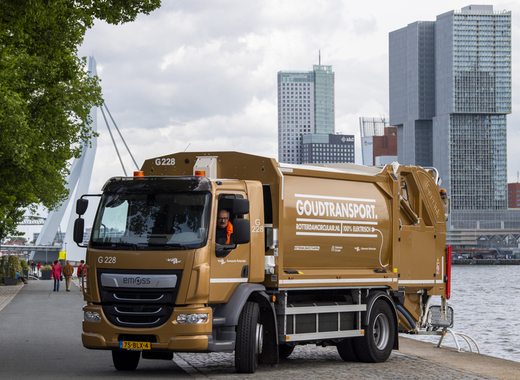 Rotterdam officially launched its first electric garbage truck on Wednesday 29th May, report the city authorities. The new vehicle emits no carbon dioxide and is much quieter. The city is highly motivated to make it so that all its own vehicles are clean by 2030. Currently there are 162 electric and 244 hybrid passenger cars, two hybrid garbage trucks and since last month - an electric garbage truck. Two more will be added in the coming six months.

The electric garbage trucks are still an in an experimental phase, hence it is not possible to have all of them run on electricity at the present moment. To start with, it will require a much larger charging station, which is why the municipality is also looking at other clean fuels, such as hydrogen.

The new garbage truck is fully electric and has been extensively tested since April. The car can run for approximately 170 kilometres on a full battery. A garbage truck travels an average of 80 kilometres per day in Rotterdam which means one stop for charging every ordinary day.

It takes approximately four hours to fully charge the electric vehicle. This is possible at a charging station at the home base on Kleinpolderplein. The construction of the charging facility alone took more than half a year. Among other things, special cables were laid in the ground and major changes were needed in the transformer house.

The launch of the electric garbage truck is part of a larger strategy of the Dutch city aiming to make it energy-efficient and circular with clean air. The goal is to halve CO2 emissions in 2030 compared to 1990.