Saint-Étienne begins the solarisation of its real estate heritage

Unprecedented in France, the project is expected to cover the electricity of 12,000 households 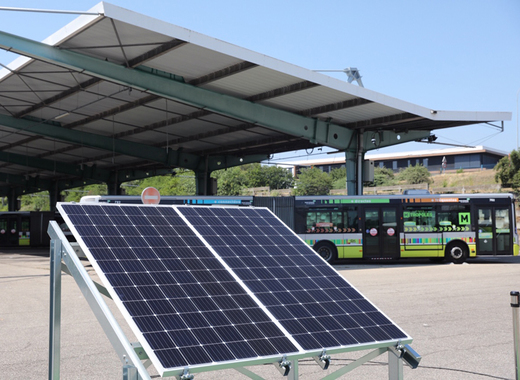 The French Metropolis Saint-Étienne announced this month a major project for positive energy transformation, namely – the solarisation of its real estate heritage. Starting this summer, around 5,000 solar modules will be installed covering 8,000 square metres of roof surfaces. The buildings, owned by Saint-Étienne Metropolis will thus become energy positive and what is more, a part of the energy generated is expected to be used for the tramway network. As per plan, a quarter of the passengers shall be transported on solar energy.

The first solar panel was installed on July 5th and most of the remaining panels are to be installed in 2020. Moreover, no less than 150 public buildings will end up with photovoltaic panels, with a total amount of 200,000 square metres of ground needing to be covered in total. This, accordingly, will prevent the emission of 15,000 tonnes of carbon dioxide per year. Emblematic sites are included in the project, such as the Museum of Modern Art, the Opera, Novaciéries, the Geoffroy-Guichard stadium, but also some school buildings and sport facilities.

The project is carried out by the Metropolis of Saint-Étienne, together with GreenYellow and the Energy Shared group. The newly solarized buildings, first of which will be equipped by this fall, will produce 30,000 megawatts hours of energy, which is enough to cover the consumption of 12,000 homes, heating excluded.

"This solarisation of heritage project is part of Saint-Etienne Metropolis sustainable development policy since 2014 and represents a major change in terms of energy transition. Through this project, unprecedented in France, our metropolis demonstrates, once again, its ability to evolve, innovate and transform " said Gaël Perdriau, President of Saint-Étienne Metropolis.