San Sebastian has a map showing places dedicated to women

The Spanish city has a map indicating all streets, parks, squares or other public places named after distinguished women 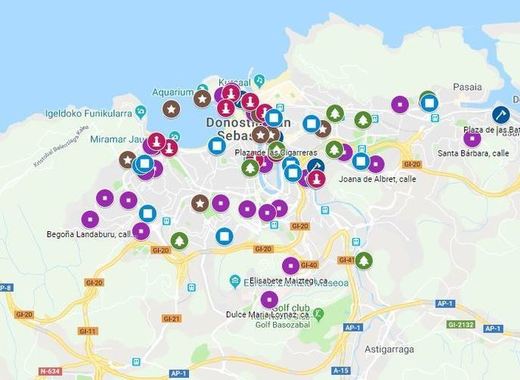 The Women and City Forum (Foro Mujeres y Ciudad de Donostia) presents the "Donostia de las mujeres" map. The unique online tool shows the streets in the Spanish city of San Sebastian, dedicated to women and provides biographical information about them. This map is an initiative of the forum and is realised in the context of the Master in Equality of Women and Men of the EHU-UPV carried out in the House of Women of Donostia (Casa de las Mujeres de Donostia).

In San Sebastian, as in many other cities, there are not many streets named after women, quite a few of which refer to women of royalty or religious vocations. Even worse, people who pass nearby a site rarely know who the woman it bears the name of was. Thus, the aim of this map is to highlight the insufficient number of sites named after distinguished women. Furthermore, it aims to make their lives known and contribute to the recognition and remembrance of the women who played significant roles in the history of the city. The map also includes information on parks, sculptures and trades traditionally made by women. It can be accessed from this link: https://labur.eus/donostiadelasmujeres