San Sebastian unveils an artistic homage to the heroines of feminism

The initiative is carried out by the Kontadores Youth Centre 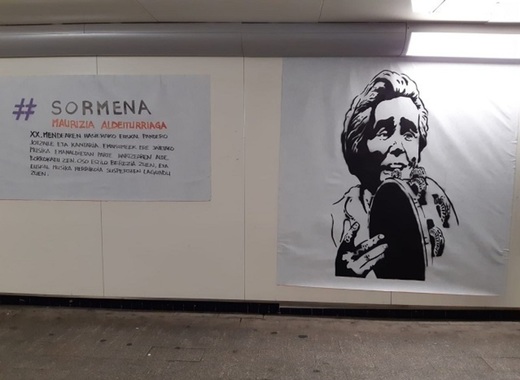 The Donostia-San Sebastian municipal website informed the public that starting tomorrow, 1 September until 13 September the walls of the Pasadizo de Egia (a passageway leading to the city train station) will be turned into an art exhibition featuring stencil portraits of 12 women considered to have become icons of feminism. This will be carried out in collaboration with the Kontadores Youth Centre of the Basque city.

It was originally planned for 8 March

The exhibition was meant to commemorate 8 March, or International Women’s Day, earlier this year but an administrative error led to the portraits being erased by the street cleaning services of the city. This time it is expected that all confusions have been duly resolved and the project can be unveiled without a hitch.

“It is a work developed by the young people who participate in the stencil laboratory of Kontadores and who have focused their project on 12 iconic women of the feminist struggle,” said Duñike Agirrezabalaga, the Councilor for Women’s Rights and Equality in the city.

Stencil paintings are well-known among the connoisseurs of street art. Those are created by applying an aerosol spray paint to a previously prepared cutout form giving a certain DIY and urban esthetic to the creation.