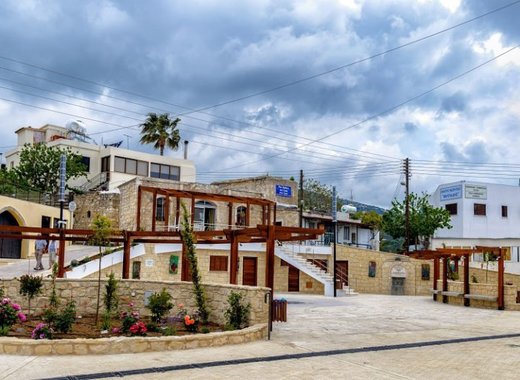 Last week, the majority of Tala councillors finally signed the paperwork allowing for phase two of the planned upgrade to the centre of the village to go ahead. They had been refusing to do that until the newly-renovated and recently pedestrianised square is opened to traffic. Five out of the eight councillors have now signed and the problem has been solved.

According to Areti Pieridou, the local community leader and the Paphos District Office, the majority of the members of the nine-member community council had reneged on a previous unanimous decision to go ahead with both phases of the project, and instead insisted that a road is created through the centre of the square. Following the taking of the decision and the unanimous vote, only two new council members have been voted in.

In 2017, phase one of the project to renovate the village centre of Tala was completed. The square was pedestrianised and modernised, and a central fountain, which makes colorful shades, was added to the new look. Water pipes under the square were replaced, electricity cables placed underground and the drainage system was improved. The square has also been paved, new lighting installed and flowers planted. The cost of the first phase is 700,000 euros.

The second phase includes the traffic arrangements on some of the roads at the heart of the village. Two small roundabouts will be created making access to and from the village easy, some roads will be one way, others widened, pavements will be created and new road surfaces will be put in. The second phase will cost around 600,000 euros. The project is funded by the community council through the Paphos District Office.