One of the most spectacular Easter celebrations in Europe 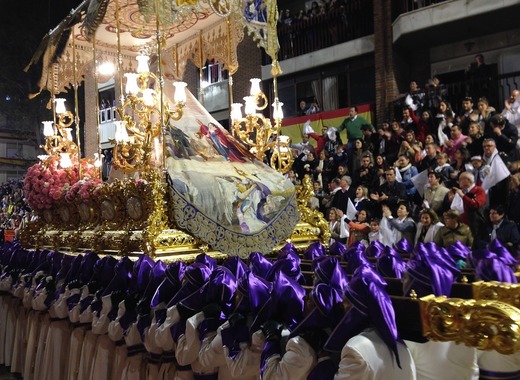 Spain is well-renowned for its Semana Santa or Holy Week traditions. Semana Santa de Sevilla, is one of country’s most important religious celebrations. Easter week is one of the most spectacular and emotional fiestas here. Religious devotion, art, colour and music combine in processions to commemorate the death of Jesus Christ. The processions take place during the week leading up to but not including Easter Sunday.

Some 50 000 people put on traditional robes to parade in the 58 organized processions, while the "costaleros" carry the pasos (religious statues) on their shoulders. Each of over 50 brotherhoods (cofradías) has two floats. The floats often weigh over 2000 kg and it takes many months of practice before the big day. On average there are 40 “costaleros” per float with each one supporting a weight of around 50kg for around 8 hours. Following the float penitents are dressed in capes and ku klux klan looking head gear. This hides their identity, the meaning being that God is the only one who knows who they are.