The device becomes a playable sculpture connected to a digital organ 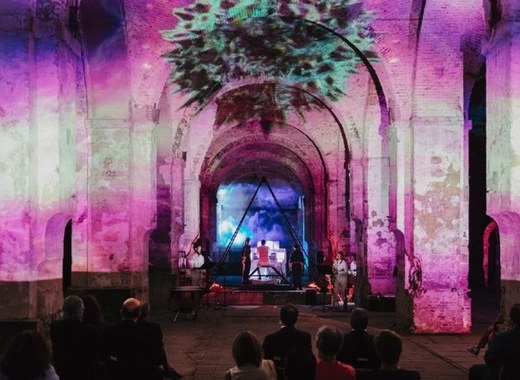 The set of keyboards, which used to serve the organ in the Seville Cathedral, were subject to refurbishment in order to be utilized as the keys for a digital organ called ‘Máquina Sonora’ (Sound Machine). The new device was unveiled yesterday at an audio-visual show called ‘Prometheum, la luz de artes’ (Prometheum, the light of the arts), which was staged the Royal Artillery Factory of Seville. City authorities, among whom was Mayor Juan Espadas, were in attendance at the spectacle.

Did you know that the keyboard set of a church organ is called a console?

The organ keyboards in question were manufactured in Spain in the 1960s. These were, however, replaced already back in 2003 with a more contemporary model that allows for electronic signal transmission to the instrument’s pipes. The older console stayed unused until a project was conceived to revive it and put it back to use.

The initiator of the restoration was Alqvimia Musicae Foundation, a non-profit organization specializing in the staging of shows that combine music with art in order to bring about new aesthetic and sensory experiences to the audiences.

The creation of the ‘Máquina Sonora’ was also made possible by the financial contributions of Cajasol, La Caixa and ICADA. Technological know-how was supplied by the inventive minds of students from the ADA ITS Technological Institute, which is slated to become the permanent home of the new instrument.

The console was turned into a sculpture in order to give it a more artistic image. As for its original purpose, it was preserved by digitizing the keys with Hauptwerk software. This program will allow the keyboard set to play organ music, reproducing tones from many pipe organs from around the world.

The debut concert last night was supplemented with the visual creations by the artists Beatriz Rivas and Lucía Núñez who added extra dimensions to the sound by projecting live mapping images on the walls and ceiling.