Slow lanes for pedestrians looking at their phones open in Manchester 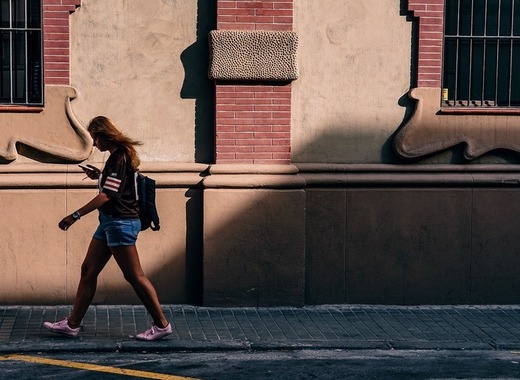 Sometimes there’s something vitally important you need to look at on your phone. Sometimes there’s an urgent message from a friend or a colleague. And sometimes you’re just bored. We all know what it’s like to keep walking while staring at the screen of your mobile – you’re slower, less focused on the path ahead and you sometimes bump into other pedestrians – some of them also looking at their phones. According to studies conducted in the UK, 75% of respondents state that they too are guilty of walking around with eyes firmly fixed on their phones. The same study also reveals that 38% of Brits have also collided with other people while doing so. Such encounters can at the very least be described as awkward and best to be avoided.

The city of Manchester is already on top of the problem. Along one of its busiest shopping streets, Hardman Boulevard, two adjacent “mobile phone safe lanes” were established. The 75-meter-long stretches are marked with arrows and signs separating them from other parts of the pedestrianized areas, making them available entirely to people who are walking slowly while staring at their phones. This innovative measure will certainly spare you some awkward daily encounters with fellow citizens.