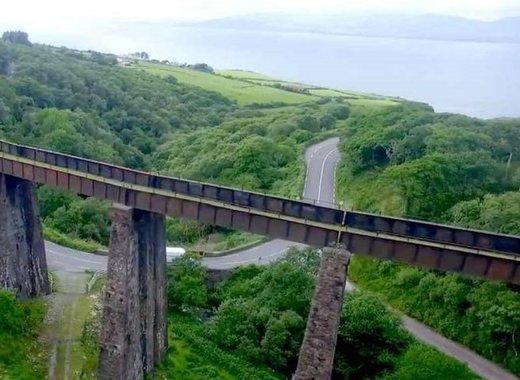 The South Kerry greenway, a long-standing project promoted by Kerry County Council with the aim of reversing the population and economic decline in the south of the county, has finally cleared the hurdles towards its implementation. Last week the project was given the go-ahead by An Bord Pleanála, the body that rules on appeals stemming from local government development decisions in the Republic of Ireland.

The Cathaoirleach (Chairperson) of Kerry County Council, Cllr Patrick Connor-Scarteen hailed the decision, which in his opinion carries a strong impetus for the county and for south Kerry in particular. "This greenway will bring huge tourism, social and economic benefits to the entire south Kerry area and I look forward to its construction at the earliest opportunity," said the mayor on the Council’s Facebook page.

The planning permission for the 32km greenway allows compulsory purchase of over 220 landholdings along the route which follows the historical former Ring of Kerry railroad. This in fact has been the prime point of disagreement in the six years since the launch of the project.

The affected landowners, mainly farmers, have resisted the council's plan to impose Compulsory Purchase Orders (CPO) under the Housing Act. The objectors have been joined by environmentalists who fear that the proposed greenway, stretching from Reenard to Faha, would have a negative impact on some of the surrounding natural habitats.

Commenting on the planning permission, Pat O'Driscoll, chairman of the Kerry branch of the Irish Farmers' Association (IFA), told RTÉ that the organisation backs a Voluntary Land Acquisition Agreement strategy that would avoid the use of CPOs. He made it clear that IFA recognised the importance of projects, such as the greenway, as boosters of agri-tourism and economic activity in rural areas facing a downturn.

Population and industry decline settled in the area following the demise of the Great Southern Railway from Killorglin to Cahersiveen. Ever since its launch in 1893 until its closure in 1960, the railway had been carrying the produce of local farmers and fishermen to national markets as well as tourists to County Kerry.

The South Kerry greenway is planned as a 3m-wide paved cycle & walkway. The council hopes that, thanks to the spectacular views over the Atlantic, it would attract large numbers of active travellers, copying the success of the Great Western Greenway in Mayo and the Waterford Greenway.

With an estimated cost of more than EUR 20 million, the greenway will be up against some serious engineering challenges. Several of the old railway line's structures are in need of repair, including the Caherisveen railway bridge, the Gleesk viaduct and the Drung Hill Tunnels. A new bridge will be built, as well as underpasses of the N70 Kerry Ringway.