After the previous Østerbro skating rink was demolished in 2008, there has been a growing demand for a replacement 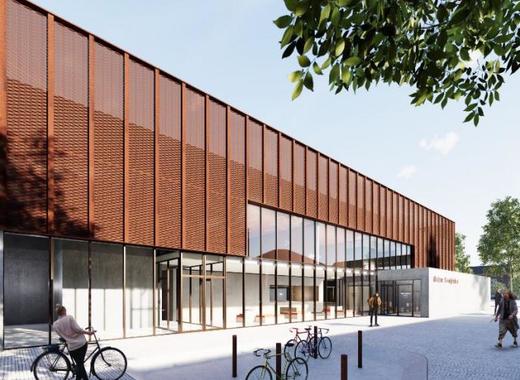 A new, state-of-the-art skating rink will soon be opening in Copenhagen’s Østerbro. It will not only be an important social and sporting gathering point for citizens who have been craving for a new ice venue, but it will also be the first building to be built in the Danish capital’s new Østre Gasværk district.

A building block towards the future

The completion of the new ice rink is something much more than a large construction project. On the one hand, it answers popular demand for a new skating venue, which has been growing ever since the last rink was demolished back in 2008. On the other, it is a vibrant representation of a better tomorrow as it will be the first building in Copenhagen’s new Østre Gasværk district.

Located just behind the Østre Gasværk Teater, it will be the first building in the Østre Gasværk Kvarteret, which in the coming years will grow on the Østre Gasværk site between Østerbrogade and Strandboulevarden. In addition to the skating rink, private and public housing, a care centre and a parking garage will also be erected in the area. Not only that, but the entire location will grow into a green, recreational oasis with a park and an activity path that winds throughout it.

Highlighting the importance of the new Østerbro skating rink and the district that will take shape around it, Copenhagen Mayor Frank Jensen stated that “Skøjtehallen will be an important centre for Østre Gasværk Kvarteret, where a completely new urban space will be created in Østerbro in the coming years. This will create the framework for even more and better sports facilities and social life in the area, where skate-enthusiastic Copenhageners can get involved at both an elite and leisure level."