An unforgettable staycation awaits all those who avoid travel 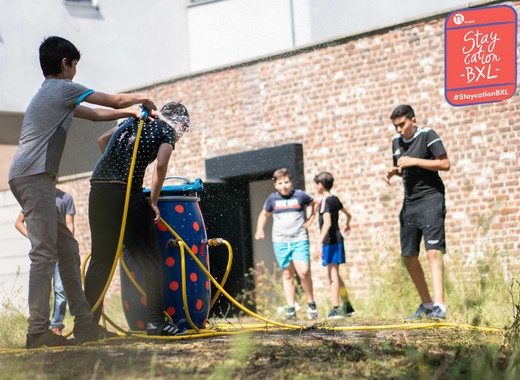 The Flemish Community Commission of Brussels-Capital region (VGC) announced the approval of the second set of projects part of the Staycation BXL campaign. As a result of the two rounds, no less than 1 million euros will be invested in initiatives aiming to make this summer more exciting for everyone staying in Brussels. Spread across municipalities in the region of Brussels, these initiatives range all the way from youth activities, through sports, culture and leisure.

Staying in Brussels this summer will be different

This summer promises to be like no other, because of the coronavirus pandemic and the remaining danger of a second wave. For this reason, there will certainly be more people who opt to remain in Brussels and this prompts the need for an extensive holiday offer.

This is what motivated the Commission to launch the call for projects Staycation BXL and to invite local creative minds to suggest ideas on how people can spend their free time in a more attractive way during the upcoming months.

The call resulted in the approval of 94 projects after the first round and 85 initiatives after the second. Their total amount exceeds 1 million euros, provided by the commission.

One of the examples is the restoration of the water of the temporarily closed swimming pool of Ixelles to create an artistic pop-up waterway for the neighbourhood.

Workshops and a neighbourhood party will transform the (pedestrian) bridge at Rue Pierre Marchant in Anderlecht. The library of Uccle will also host a pop-up reading bar in its garden.  Yoga for All will bring life to parks and covered locations in several Brussels municipalities.

Pascal Smet was eager to benefit from one of the first round winners, Kanal It Up. Source: Kabinet Smet

“I believe in the strength of the committed citizen who makes the difference by taking small initiatives, leading to a more liveable neighbourhood. Many citizens are taking actions every day to make their city a better place. That is our true asset and I see that commitment fully reflected in the submitted files for StaycationBXL," says VGC college member for culture, youth and sport Pascal Smet.

Staycation BXL thus gave the chance to organisations and individual Brussels artists to realise their summer projects. Finally, to make a staycation possible, the region is making extra public space available for its citizens, through the creation of new play streets, living streets and low car traffic areas.