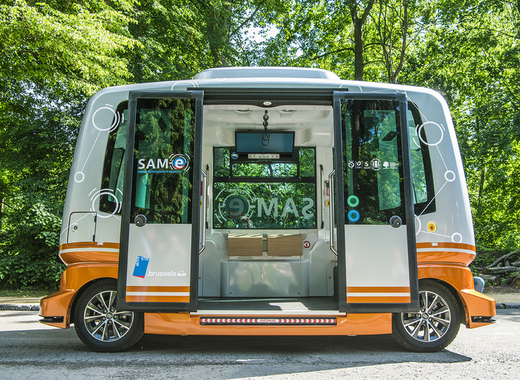 STIB is considering the implementation of a new solution for areas less served by public transport. Accordingly, between 28th June and 22nd September in Parc de Woluwe, Municipality of Woluwe-Saint-Pierre the mobility operator will test autonomous buses.

STIB wants to install them in zones poorly served by public transport, such as university campuses or parks. As of Friday, two buses have been launched serving a distance of 1800 meters with five stops and moving at 10km/h speed. Each of them can carry six passengers seated and six standing, each accessible to persons with reduced mobility. They will be circulating each Friday, Saturday and Sunday between 13h and 19h and can be tested for free. STIP personnel will be present on board to assist passengers and collect their opinions.

The project is implemented in partnership with Brussels Environment that manages the Park of Woluwe, Solvay, USH (Lab Box/D’Ieteren), the municipality of Woluwe-Saint-Pierre and the RATP group. The latter has been testing autonomous buses in different environments since 2016.

Thus, the autonomous vehicles of STIB, named SAM-e (for Smart Autonomous Mobility electric) are small (4m long, 2m wide) constructed by the French company EasyMile and are rented from Lab Box/D‘Ieteren. They have a detection system which enables the vehicle to spot obstacles and move accordingly. The bus is powered on four batteries which are charged during the night.

On this occasion, Mayor of Woluwe-Saint-Pierre Benoît Cerexhe was clear that the locality wants to position itself as a pioneer in terms of smart city. He is welcoming to each sector willing to digitalize the city.

Finally, the site was selected for its low automobile circulation and the width of the asphalted alleys. The park itself is spectacular for visitors as it has been classified as a Historical monument by Natura 2000.