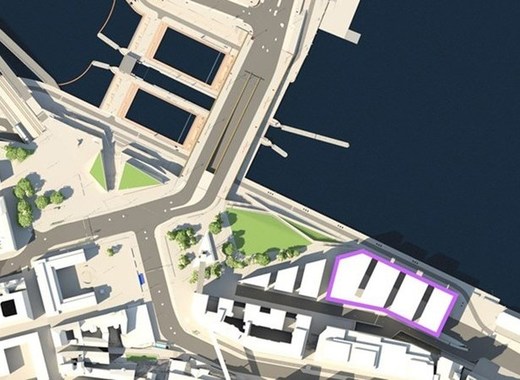 Agreement over a new location for the controversial Nobel Centre has been reached between Stockholm City and the Nobel Foundation, which administers the estate of dynamite inventor and Nobel Prize initiator Alfred Nobel, Radio Sweden reported.

Stockholm City's Joakim Larsson, Vice Mayor of City Planning and Lars Heikensten, managing director of the Nobel Foundation, revealed on Friday that the new location for the Nobel Centre will be by the waterfront at Slussen, which is undergoing extensive redevelopement.

Slussen connects two of Stockholm's islands and is about one kilometre from the originally intended construction site of the Nobel Centre - by the waterfront of Blasieholmen peninsula.

The decision to build the first ever permanent home for the Nobel Prize, complete with a museum and administrative building, was taken in 2013. The design of  British architect David Chipperfield consisted of a modernistic, shining brass structure, in sharp contrast to the 19th-century customs house that stands in this place and was doomed to demolition, and the Swedish National Museum next to it.

The design, size, colour and location of the projected Nobel Centre provoked public outrage, including criticism by King Carl XVI Gustaf himself and the project was taken to court.

In 2018, a Swedish court rejected the building permit of the already revised version of the original Centre on the grounds that it "would affect the readability of Stockholm's historical development as a port, shipping and trading city". The court also said the construction would cause significant damage to the preservation of Blasieholmen's cultural heritage and environment.

The Nobel Foundation said that it will now initiate the process of seeking funding for the relocated project and appointing an architect with the aim to start construction work in 2025 or 2026.

The Foundation hopes that the relocation agreement will not only provide a new venue for the Nobel award ceremonies, but that the new centre will become a major tourist attraction for Stockholm and Sweden.