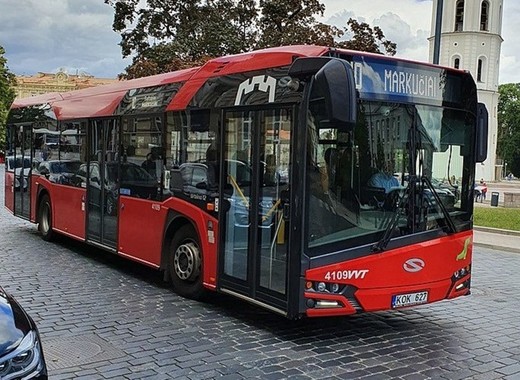 Since yesterday, an electric bus on a test run in Tallinn has been open to passengers. The eco-friendly vehicle is operating between the Balti Jaam train station and the residential district of Mustamäe in the Estonian capital. The service is planned to run till July 15, public broadcaster ERR reported.

Gliding noiselessly along its route, the Polish-made Solaris Urbino 12 electric bus must prove its impressive specifications, the focus of evaluation being battery capacity and durability. The bus has a battery capacity of 220 kWh and can travel 150 km on a single charge.

Tallinn City Transport (TLT) is testing the e-bus as part of its policy for phasing out fossil-fueled transport while optimizing vehicle maintenance costs along the way. Diesel buses are set to be discontinued in 2025 at the latest. With the purchase of some 650 electric buses and the scrapping of trolleybuses and natural gas-propelled buses, the city aims to have an all-renewable energy public transport fleet within 15 years.

Ticket sale on buses can come to an end

Meanwhile, Tallinn is experimenting with the option of ending the opportunity for passengers to buy tickets in cash upon boarding the city buses. The city government has not yet made a final decision.

As Tallinn residents have free access to public transport in the city, most of the paper ticket buyers are tourists whose numbers have plummeted due to the coronavirus pandemic. To ensure the safety of bus drivers, drivers were separated from the passengers and stripped of the obligation to sell tickets after the outbreak.

The trial period should show whether there is a need to sell paper tickets on buses at all, Andrei Novikov, Deputy Mayor of Tallinn, told ERR. According to him, bus drivers sell tickets for about half a million euros a year.

Despite public transport being free to Tallinners (and temporarily to visitors), the annual revenue from ticket sales amounts to EUR five million. Novikov compared this figure to the construction cost of a schoolhouse or one and a half kindergartens, implying that Tallinn taxpayers will have to compensate for the shortfall out of their pocket if there are free trips for all.