The €5 million, EU co-funded project has been delayed by a lawsuit 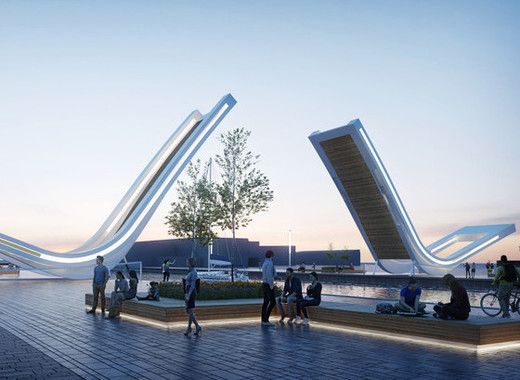 A state-of-the-art double-leafed bridge at Tallinn's Old City Harbor is expected to open in the second half of 2021, now that the project has overcome its final hurdle, Port of Tallinn announced.

The construction of the bridge at the Admiralty Basin, which has been postponed due to a lawsuit, is expected to take two years and will cost EUR 5 million. The project is co-financed by the European Union.

The pedestrian bridge, which will also open to marine traffic, will connect terminals A and D of the harbor.

According to the Development Department at the Port of Tallinn, quoted by public broadcaster ERR, builders will follow the winning design in the architectural competition, drafted by Dutch-Latvian team SIA Witteveen + Bos Latvia.

The new bridge is part of the ambitious Old City Harbor development plan called "Masterplan 2030" which aims to combine port and urban development into a functional system.

The winning "New Balance 100" project was announced way back in July 2017. Construction work was supposed to start immediately and to be accomplished by the end of 2018.

The Port of Tallinn plans, however, were temporarily thwarted by Lootsi Holding, a company with offices close to the planned location of the bridge, which filed an appeal before the Tallinn Administrative Court.

The company argued that the bridge would drastically transform the quiet area into a busy zone with perpetual light and noise signals accompanying the raising of the bridge for ships passage. Lootsi Holding proposed a smaller bridge to be built further away from their office building. The company lawyers contested the bridge building permit and delayed the construction process.

In the long run, Tallinn Administrative Court dismissed Lootsi Holding's appeal, ruling that the construction of the Admiralty Basin Bridge did not violate the applicant's rights.

Now that the final obstacle has been cleared, the Port of Tallinn hopes the new bridge will become one of the landmarks of the Estonian capital.