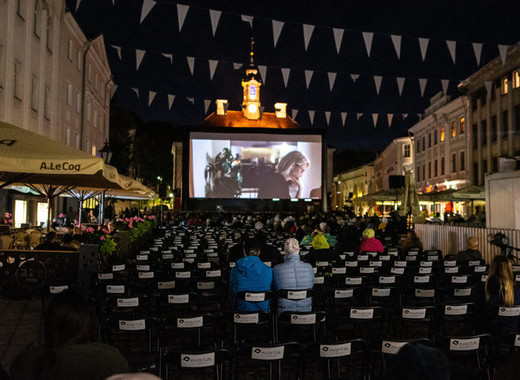 From 10 to 15 August, Tartu Town Hall Square will become the largest open-air cinema in Estonia for the 15th time, with 11 films about love to be projected on a big outdoor screen. In addition to it, Tartu love film festival Tartuff will offer for the first time a virtual cinema hall, which can be accessed from homes all over Estonia.

The films will reach their audience via the web platform Elisa Stage, which also broadcast the Haapsalu Horror and Fantasy Film Festival in May. All films that will be shown on the outdoor screen in Tartu can be watched free of charge, but virtual screenings demand the purchase of tickets.

"The virtual festival is intended for those who cannot take a seat in the square or cannot physically come to Tartu. It provides an opportunity for those who have never been here to get acquainted with the Tartuff programme," says festival director Kristiina Reidolv, quoted by ERR.

Due to the coronavirus-related restrictions, a thousand seats will be brought to the Town Hall Square, ensuring compliance with the 2 + 2 rule, and disinfectants will be readily available. A 50 percent occupancy rule is in place for Athena Centre where the documentary and children's films will be screened.

This year, the festival’s sub-theme is visual art. The programme, which will be unveiled in late July, includes almost 20 films, in addition to numerous special events, involving the Tartu Art Museum and the Higher School of Art in Pallas, among others.

Last year, the festival had 15 000 visits. The films that enjoyed most popularity were the Finnish youth film "Stupid Young Heart" and the Italian comedy "When Mother Is Away", each attended by 2 300 viewers.

Tartuff is organized by the Black Nights Film Festival in cooperation with the City of Tartu, Tartu Film Foundation and Tartu Creative Economy Center.