‘Tatty’ headlines the 2020 Dublin One City One Book Festival 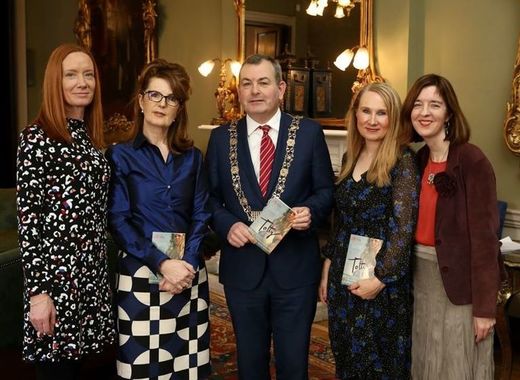 A blond-haired girl with a serious-looking face, pictured on the cover of a book, was all the talk of Dublin’s Mansion House today. The book in question was the highlight of the 2020 Dublin One City One Book Festival, which had its programme launched by the newly-appointed Lord Mayor Tom Brabazon.

The festival is an annual Dublin City Council initiative, spearheaded by Dublin City Libraries, which encourages not residents alone to read, during the month of April, one book linked to the Irish capital city.

This year’s featured book is Tatty by Christine Dwyer Hickey, a devastating yet amusing tale of a girl growing up in a troubled family in Dublin during the 1960s and 1970s. Previous festival titles have included Bram Stoker’s Dracula, Strumpet City by James Plunkett, Dubliners by James Joyce, and last year’s choice The Country Girls Trilogy by Edna O’Brien.

Christine Dwyer Hickey is a Dublin-born writer who has published eight novels, a collection of short stories and a full-length play. Tatty was shortlisted for Irish Novel of the Year 2005, ranked as one of the 50 Irish Novels of the Decade at the Irish Book Awards 2010 and was nominated for the Orange Prize (now the Women’s Fiction Prize). Her latest novel is The Narrow Land set on Cape Cod in 1950.

A series of mostly free events themed around Tatty will unfold in April. Author Christine Dwyer Hickey will be taking part in discussions and interviews in venues across Dublin. Film screenings, dramatised readings, family events and musical performances will round out the festival programme.

Speaking on the occasion, Lord Mayor Cllr. Tom Brabazon said: “We want to encourage everyone in Dublin to read this one book – in order to enjoy a communal experience as readers – an idea that is truly admirable in its simplicity. We hope the book will be read by many, thousands of times between now and the end of the year and that this will lead to plenty of conversations and much discussions among book clubs, friends, family and co-workers.”

For the full programme and details of all events go to the festival homepage.