You'll be seeing attractions from a completely different perspective, as well as taking photos from several other angles 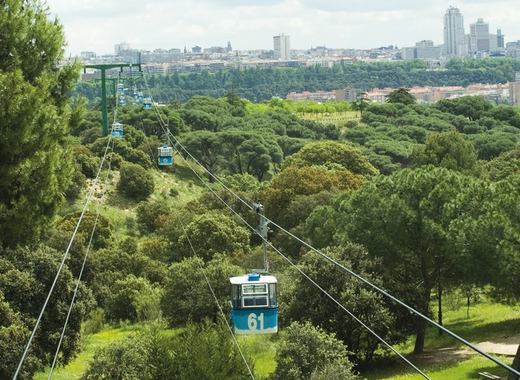 If you want to see Madrid from a bird's eye view, take the cable car ("el Teleférico") that was originally built as part of the Parque de Atracciones amusement park. Opened in 1969 (and with the same decor since then) gives the opportunity to enjoy one of the best views of the city on its west side, and it’s a perfect place to see the sunset. The journey starts on the Paseo del Pintor Rosales street, near the Argüelles Metro station, and takes you over the River Manzanares and into the Casa de Campo park.

The cable cars have recorded commentaries describing what you are looking at. Many of the city's famous sights may be seen, such as the Parque del Oeste Park with La Rosaleda, the Torrespaña communication tower, the Royal Palace, Almudena Cathedral and the San Francisco el Grande basilica. The Teleferico runs every day from April to September and at weekends during the other months. The exact days and times of opening may be found on the Teleferico website.