The Almond Tree in Pécs was named Tree of the Year 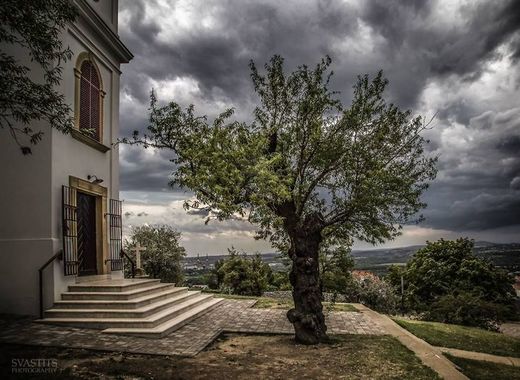 Located on the Snowy Hill in Pécs, the Almond Tree (or Prunus Dulcis) has been living opposite the Church of Our Lady of the Snow for the past 135 years. Considered symbolic of eternal renewal and education, right in front of a magical landscape, the tree has witnessed the rise and fall of several generations of Hungarians.

It is the contest European Tree of the Year that is interested exactly in these extraordinary stories behind the most natural elements we may see around us and for nine years has been awarding the trees that enable us to breath freely and enjoy nature. This year’s edition was organized with the support of Karmenu Vella, Commissioner for the Environment, Maritime Affairs and Fisheries and the winner was announced only а few days ago in Brussels – on 19 March. The Award Ceremony in the European Parliament was held under the auspices of MEP Pavel POC, vice-chair of the Committee on Environment, Public Health and Food Safety at the European Parliament.

Accordingly, in 2019 it has been decided that the Almond Tree will receive the title. Following a vote that took place over the month of February, the Hungarian tree species has received 45,132 votes overall, thereby winning the name Tree of the Year 2019. It was nominated by the Jurassic Nature and Tour Club and supported by the Hungarian Environmental Partnership Association. Hungary has won the battle among the trees with the most interesting stories for the fourth time in the nine-year history of the race. Totally, more than 311 thousand votes were received for fifteen trees, which is a testimony to the importance of natural heritage for the European people.

“Man has worshiped trees since the beginning of time. With this contest, we continue to celebrate trees that not only help us to compensate for our CO2 production, but are also a symbol of sustainable and emotional relationship between humans and nature,” believes MEP Pavel Poc, long-term award patron.

Finally, the Abramtsevo Oak in Russia and Secular Holm Oak from Monte Barbeiro are also in top three. Additionally, twelve trees living in EU-countries have made it to the finals.

Find more: Tree of the Year