The museum consists of two floors, including several main galleries and dozens of small rooms 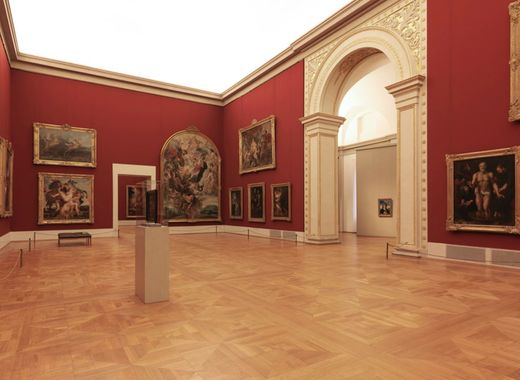 Built in 1836, Munich’s Alte Pinakothek is one of the oldest art galleries in the world. Created by King Ludwig I of Bavaria who wanted it to be the largest museum in the world with a castle-like exterior and soon after its opening, it became a widely imitated model throughout Europe for housing and displaying art.

The collection of the Alte Pinakothek, one of the most significant in the world, encompasses over 800 artworks from the 14th to the 18th centuries. The museum is known for its renowned collection of Old Masters’ paintings. Much of the collection is drawn from the personal galleries of various Bavarian royals and from defunct monasteries. Some of the most famous paintings on the walls of the Alte Pinakothek are the Virgin and Child, Leonardo da Vinci; The Canigiani Holy Family, Raphael; Self-Portrait with Fur-trimmed Robe, Albrecht Dürer; The Battle of Alexander at Issus, Albrecht Altdorfer; The Land of Cockaigne, Pieter Bruegel and Self-Portrait, Rembrandt.