The Berlin’s river Spree – an excellent place for swimming 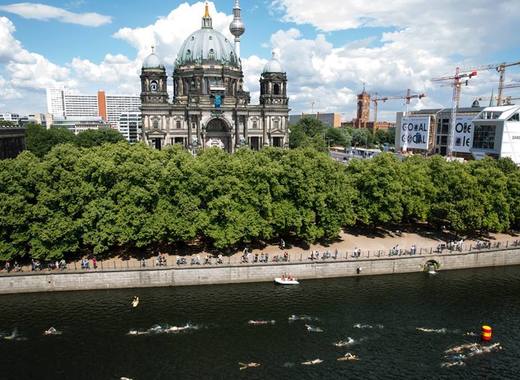 A record number of participants have swum in the Spree River, Berlin at the Fourth Flussbad Cup as the city celebrated the yearly open use of the Spree Canal. Over 500 people attended the event, organised by the non-profit Flussbad (river swimming pool) Berlin Association, which lets people swim a stretch of the Spree.Closed to swimmers since 1925 after increasing pollution, the Spree River has this year been declared “excellent” by water officials allowing 168 competitive and 342 recreational swimmers to take part.

The project aims to reanimate the side-canal of the river Spree, between Schlossplatz and Bode-Museum, one of Berlin’s biggest underused brownfield areas in the heart of the city. They want to turn this part of the Spree into a huge natural swimming pool. This will turn the river into a sustainable, integrative, and considerate urban development.