The Black Zero’s end, or how Germany copes with crises

Faced with crises on multiple fronts, the Federal Ministry of Finance is ready to change laws and take over municipal debt in order to spur investments 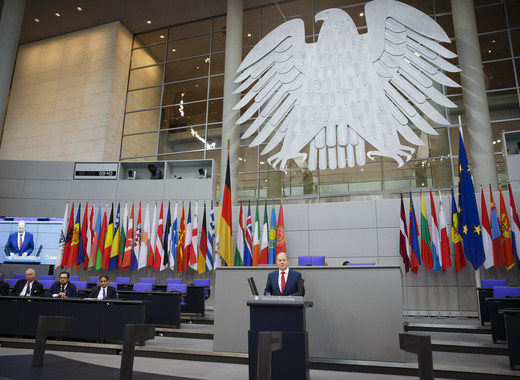 Over the past few decades, the overarching mantra of German governments has been to adhere to the principles of the “black zero” or the “Schwarze Null” in German. The “black zero” approach stipulates that governments should always be running a “balanced budget” – one that does not necessitate for new borrowing and always leads to a budgetary surplus.

The cult of the “Black Zero”

The adherence to the “black zero” project has turned into something resembling outright religious fanaticism. German politicians have been speaking with reverence about its boons and how it is transforming the country for the better. Clear example of said fanaticism can be seen for example at the Ministry of Finance’s headquarters in Hesse where an art installation called “Null”, comprised of giant black aluminium circles suspended above the ground, was put in place in 2016.

Parties across Germany have been avid defenders of the concept for years – no matter their political leanings. The two traditional centrist, big tent parties, the Christian Democrats (CDU) and the Social Democrats (SPD) have both been instrumental in enforcing the “black zero” vision.

Such is the magnitude of the “black zero’s” importance that governments, finance ministers and banking officials from other European countries have openly talked about the harm it is doing to their own economies. The severe restraint exercised by the German Federal government when it comes to public spending has had a serious impact on other Eurozone and EU members, especially during the recent global economic slowdown.

And with Germany and the entire continent now facing unprecedented times of crises, the country’s federal government might have started listening to its partners and is looking ready to embark on a slow transformational journey.

The lead-up to a transformation

One can observe a very slow and gradual change in opinion towards the “black zero” policy over the past few months – dating back to the first signs that Germany might be faced with a recession amid a global economic downturn.

The lack of government investment in crucial areas such, as infrastructure, has left the country vulnerable to the many problems currently plaguing the world. Some of the most important ones are:

Creeping steps towards a new era

Faced with crises on multiple fronts, the necessity for federal investment in a number of vital areas has become apparent. That is why, last Wednesday, Federal Minister of Finance Olaf Scholz, announced that the country’s debt brake – the “Schwarze Null” will be suspended for the time being. The former mayor of Hamburg’s decision would have been unthinkable just a couple of years ago, but times have changed since then and Germany has been forced to adapt.

The most important aspect of the announcement is perhaps its effect on municipal and regional authorities. While Scholz’ plan will be presented in detail in March, the current outlook is that the federal government will step in to relieve the pressure on local governments across the country.

The Finance Ministry’s will do a one-time debt transfer for over 2,500 severely indebted municipalities. Their debts will be purchased by the federal government, thus allowing local authorities to freely invest in other priority areas like educations, healthcare and infrastructure, rather than being preoccupied with financing loans.

Furthermore, the government is eager to increase the scope of many of its policies that have so far been geared towards the underdeveloped Eastern part of the country. In the future, the Finance Ministry aims to make no distinction between Eastern and Western German states – instead, it will start focusing on supporting underdeveloped municipalities and communities as a whole.

The German Federal Government’s plans are a gamechanger. They are a complete break with the traditional tenets of the “black zero” approach and might even lead to a wholesale reevaluation of German fiscal policy. Yet all these changes must first be approved by the two chambers of parliament with a two-thirds majority – something that might not prove easy to achieve.

Nonetheless, the very idea of change is something new in German budgetary circles. And it should be welcomed with open arms by other EU leaders – especially ECB chief Christine Lagarde who might even be jumping with joy.