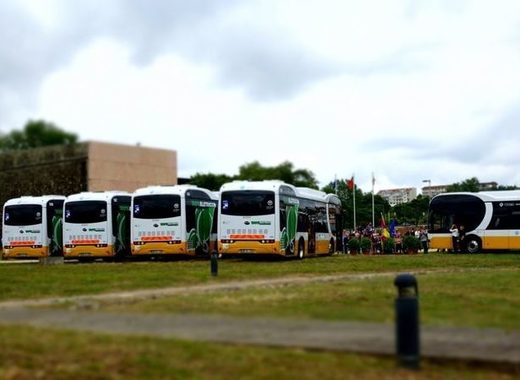 The municipality of Coimbra is located in the central region of Portugal and is the fourth-largest urban center in the country. The history of the city goes back to Roman times and there are different architecture sites presented throughout the city.

Regarding the total CO2 emissions in 2018, Portugal shows a certain decrease of 9%, according to a Eurostat newsrelease from May 2019. Yet, most of these emissions come from the transport and energy industries. The country has taken a few measures to reduce its carbon footprint. In the field of transport, for example, there is the National Action Plan for Energy Efficiency and taxation has been introduced on the purchase of passenger vehicles. The measures promote cleaner transport and further integration of environmental protection, as this report shows.

New electric fleet for the Municipality of Coimbra

The Municipality of Coimbra had taken these measures to heart and in July 2019 introduced 10 new fully electric buses to be used by the Coimbra Municipal Transportation Services. The investment amounted to 4 million Euro, 53% of which was funded by the Coimbra City Council. The rest of the financing came from OP “Sustainability and Resource Efficiency”. For the 6 months of operation, the fleet managed to reduce the CO2 release by 250 tons or 65 tons of oil-equivalent.

The successful operation of the e-buses and the reduced carbon footprint of the city will be used for another tender to purchase  14 additional fully electric buses. The new investment will amount to 5 million euros.

The transport sector of the municipality does not rein its ambition, though. It has introduced additional lines thus creating new jobs. In the 2018-2019 period, 34 new drivers were hired and the expectation is for 16 more to be hired at the beginning of 2020. The Municipal Transportation Service covers Almalaguês, Antanhol, Assafarge, Ceira, Cernache, Sao Martinho do Bispo and Torres do Mondego with more than 2,000 km of routes. The network will continue expanding in the next few years in terms of routes and fleet.

Portugal is among the countries that are most equivocal about  climate change and the ensuing environmental disasters. That is why serious measures are required to reduce its carbon footprint and introduce new ways of living in an environmentally friendly way. The new transport system and network in the municipality of Coimbra is evidence that the country is moving in the right direction.