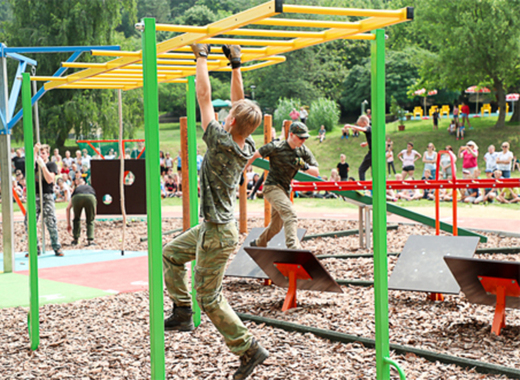 For forty years the children of Győr have been coming to spend their holidays in the cottages, out in the tent camp and to collect memorable experiences in the village of Győrújbarát. In 1979 a camp was built here, with the support of tens of thousands of people, more than 150 companies, schools and cooperatives. About 10,800 children arrived in Győrújbarát that year. Recently, it celebrated its fortieth anniversary, report from the city of Győr.

The older ones still remember the former military technology park and the tents, the flag raising on the evolving square. The taste of evening tea and bread is felt to this day, as we remember the tunes of the camp radio and the morning tournament. Many things have changed nowadays, but the playground is still there for kids looking for fun, as is the pool, for everyone who wants to be refreshed. Although this place still shows the same iconic image from a bird's eye view, the summer camp of the Győr youth has been completely renewed over time.

Mayor Zsolt Borkai emphasizes that this camp is more than a summer kid's activity, but a community-building place where many young people can get valuable knowledge and experience. He also awarded a silver medal to the institution on the occasion of the anniversary.

In addition to the local government, Erzsébet Fehérné Bocska camp leader thanked the sponsoring companies, the staff, who kept the 11-hectare area and the 45 buildings in operation, as well as the animation team, who took care of the programs and the supervising teachers who looked after the young people. Many of the children come back to the camp in the following year, which is a testimony to the good work being done. The real praise, however, is when the old campers, as adults, send their own children here, and proudly share their stories.

Participants marked the anniversary by planting a memorial tree. As dr. Tivadar Somogyi, deputy mayor said, the camp was not only renewed completely, but every year adds new features that contribute to the children's experience.