The curse of Kurz

Austrian Chancellor Sebastian Kurz has been forced to play firefighter, cleaning up the messes left by his coalition partner 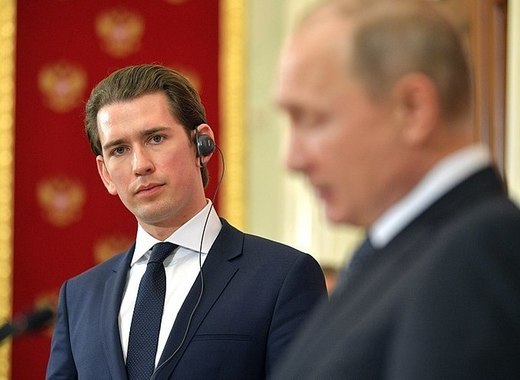 Just a few days before the vote for members of the European Parliament, Austrian Chancellor Sebastian Kurz was forced to call snap federal elections. This comes after months of tensions in an increasingly uncomfortable relationship within the ruling coalition between the Chancellor’s centre-right ÖVP (Austrian People's Party, Österreichische Volkspartei) and the far-right FPÖ (Freedom Party of Austria, Freiheitliche Partei Österreichs). This coalition is the 2nd shortest-lived government in Austria’s post-war history, ruling for just 18 months.

Entering into a coalition with the far-right was always going to present the 37-year-old Kurz with challenges. Even though he shifted his party to the right after he took over, moving it away from its decades-long centrist traditions, what followed surpassed any and all of his expectations. Over the past 6 months, the far-right Freedom Party has gone above-and-beyond in its efforts to make life difficult for the Chancellor.

The first recent major obstacle for the coalition came after the New Zealand Christchurch shooting. It turned out that the perpetrator of the horrific act was a supporter of the far-right Identiterian movement and had even made donations to its platform. Following an investigation, it was revealed that the white-nationalist group had connections with the ruling FPÖ. Amidst fears that the far-right has too much influence in the country’s higher echelons of power, Chancellor Kurz moved to have the intelligence services report directly to him, instead of the appropriate interior or defense ministers – both members of the FPÖ.

The following scandal was for more mild, but still tested the relationship between the governing parties. The deputy-mayor of Hitler’s home town, member of the Freedom Party, published a racist poem, comparing migrants to rats. Under normal circumstances, such an event wouldn’t warrant a statement from the Chancellor of the country, but the FPÖ’s initial failure to sanction its member forced Kurz to issue a statement demanding for action to be taken.

The quest of reshaping Austrian politics

Just one week later, the then-leader of the far-right party made a statement in the Krone newspaper that his party was fighting the ongoing “population exchange”, claiming that there are efforts being made for white ethnic Europeans to be displaced by Muslims – both migrants and refugees.

And finally – the event that broke the camel’s back. Heinz-Christian Strache, then-leader of the Freedom Party, appeared in a video with a woman claiming to be Russian, prepared to buy 50% of the Kronen-Zeitung and change its narrative to very pro- FPÖ. In return Strache offered her exclusive public contracts above market price, were she to found a construction company to operate in Austria. He also alluded to a potentially illegal donation system through which his party was collecting funding via charity donations and also stated the he would very much like to “build a media landscape like Orbán".

The constant stream of scandals apparently proved too much for the Chancellor and here we are – facing yet another snap election in Austria.

Let’s be clear – Austria’s political and party system has never been a shining beacon of civility and lack of corruption. Over the past 70 years, the country has had a total of 30 governments. Of those, only 10 have not included both the two main parties at the same time– the Austrian People’s Party and the Social Democratic Party of Austria (Sozialdemokratische Partei Österreichs, SPÖ). 20 of the country’s governments have been grand coalitions between the two biggest parties, constantly passing the ball between each other. This has inevitably led to cases of massive corruption and inner-governmental problems.

The third main political actor – The Freedom Party, was first founded by an ex-SS officer and was initially a proponent of classical liberalism – nowhere near to what we see now. In the 1980s the party started a dramatic shift to the right and when it entered government in 1999 with the People’s Party, it caused massive negative backlash against the country. Not only were there daily protests for 3 years straight, but the EU began a sanctioning policy against Vienna because of the far-right’s role in government. 20 years later, such backlash is no longer present and the FPÖ has become even more brazen with its attempts to woo ethnic white nationalists, white supremacists and open racists.

The latest events are expected to severely damage the Freedom party’s electoral prospects ahead of both the EU elections and the federal elections which are currently being planned for autumn. Meanwhile, Sebastian Kurz has remained not only unscathed but is probably going to come out stronger than ever. His popularity has been steadily rising despite the actions of his coalition partner and apparently his role as a firefighter to the FPÖ’s arsonist is garnering support from more centre-inclined voters. An upcoming government with one of the smaller liberal parties might be in the cards for the incumbent Chancellor – a welcome respite from his current scandal-ridden daily routine.

With EU elections this week, the Freedom Party was scheduled to appear in a massive rally of nationalists in Milan, alongside the likes of Italian interior minister Matteo Salvini, Marine Le Pen and others. That fell flat on its face – not only was the rally far from the culmination of months-long efforts by the big European far-right parties; it was also overshadowed by the scandals with the FPÖ – one of the pillars of the resurgent hard right. The unfortunate realities might be sinking in – that the “grand international nationalist alliance” is currently set to win around 70 seats in the upcoming European Parliament and the recent events in Austria are unlikely to improve their numbers.

What is more, ongoing events in Austria will likely further boost the efforts of centrist and left-leaning parties across the continent to portray anything on the right side of the political spectrum as dangerous, corrupt and prone to nationalism and populism. Their claim will be that any attempts by centre-right parties in Europe to normalize and rehabilitate the far-right will always lead their countries down the path of destruction. Given the current heated circumstances, such a statement might even hold some sway.

As a further blow to Austria’s international image, the president of Germany's Federal Office for the Protection of the Constitution appealed the Bundestag for caution when it comes to sharing top-secret information with the country’s administration. He cited serious concerns that top officials within the Austrian government might be prone to forwarding the information to Russia or other malevolent political actors.

The consequences of these events are yet to be felt, but one thing is certain – they will be in the back of the mind of every voter not only in Austria, but also across Europe – not only for national and European elections, but for regional and municipal ones as well. The “experiment” of normalizing far-right parties and killing them with kindness by allowing them to enter government is on the brink of failure. But what does the future hold? We can only guess, and you can be certain that we will be right on top of it.