The rooms in it are asymmetrical 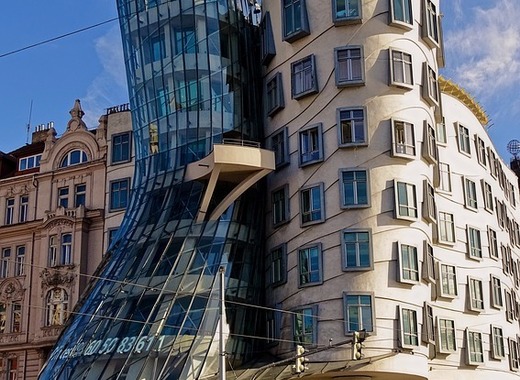 Prague, the capital of the Czech Republic, is rich in a variety of sights, especially historical ones. But there are also a great number of modern places of interest. One of them is the Prague Dancing House, a highly original building resembling and also inspired by two dancers the immortally famous duo of Fred Astaire and Ginger Rogers.

The Nationale Nederlanden building, known as the Dancing House is one of the most significant landmarks in Prague and definitely the most internationally renowned piece of post-1989 Czech architecture. It is home to almost 3000 square meters of office premises, a restaurant, a gallery, and a conference centre. Most importantly, there is a sightseeing terrace on top of it, from which you can overlook the breathtaking panorama of Prague.

The unusually shaped building, an example of the deconstructivist architectural style, is based on a reinforced concrete construction with 99 differently shaped adjoined facade panels. The frontispiece consists of 2 towers, resembling a dancing couple. The building has 9 floors and the rooms in it are asymmetrical.