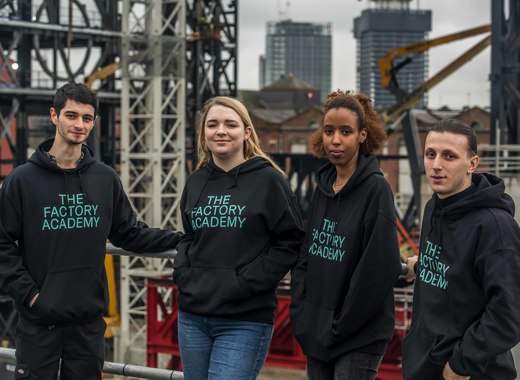 Welcome to The Factory Manchester – Manchester’s one-of-a-kind venue that brings together all aspects of culture. As we reported earlier in November, The Factory is still under construction – but one important change has come about – it has now only recently started offering apprenticeships to locals.

A provider of culture and entertainment, but also of opportunity

The main goal of The Factory Manchester is to provide a cultural venue for the entire city and to support its budding and expanding cultural scene. One way of accomplishing that is by providing apprenticeships to eager youngsters in fields that they covet.

The two-year apprenticeship programme – The Factory Academy, makes up a part of The Factory Manchester and has been developed by the Manchester International Festival alongside several other cultural organisations and institutions. Together they are committed to giving locals valuable skills, advice and experience in order to prepare them a lucrative career in the creative industries.

The Factory Academy recently welcomed its first five participants, who began their new jobs last week – two at the Royal Exchange Theatre, one went to The Lowry, one at HOME and one at the Manchester Metropolitan University. Over the next few months, these first lucky few will get firsthand experience in backstage management – sound, lighting and the building of sets.

The first 5 apprentices will certainly not be the last, according to the Manchester City Council. The Factory Academy will keep on expanding in order to supply the creative industry with new impetus and fresh faces.

Sir Richard Leese, Leader of Manchester City Council, stated that "Providing skills training and job opportunities to local people alongside an unrivalled and world-class programme of innovative and world-class cultural activities is one of the key aims underpinning The Factory.  The opportunities now being created through The Factory Academy are a taster of what's still to come and demonstrate the positive impact The Factory is already starting to have on people's lives."