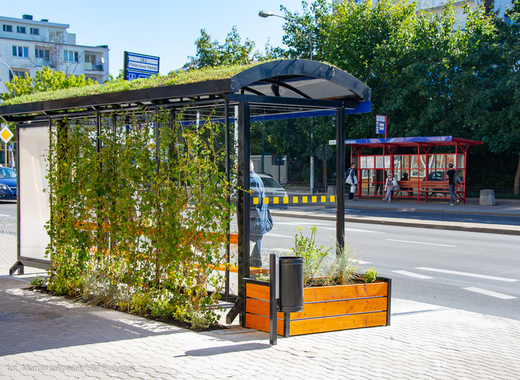 Source: The green stops in Bialystok are among the winners of the annual Polska Architektura XXL 2019 plebiscite. Photo by Marcin Jakowiak / UM Bialystok

The green stops in Bialystok were one of the innovative architectural projects awarded in last week’s ceremony of Polska Architektura XXL 2019 plebiscite. Internet users passionate about architecture selected the sustainability solution in the Polish city in the landscape category.

The 12th edition of the annual Polish Architecture XXL plebiscite was concluded on 2nd June with an online gala ceremony, due to the coronavirus pandemic. One of the public landscape projects of Bialystok was among the lucky winners, as decided by online users. The green stops received 1071 votes.

The plebiscite has been organised by the Art Architecture Group for 12 years. It represents an overview of the most interesting projects in the development of Polish architecture.

In this edition of the competition, 130 architecture objects applied and received a total of 44,5 thousand votes before the deadline in February 2020. A jury made up of recognized professionals awarded the lucky winners.

Green stops – a biodiversity solution to heat in the city?

The first green stops in Bialystok were installed last year. Two bus shelters equipped with plants appeared on the Independent Students' Union Square, the third of them stands at Pałacowa Street. The choice of location for the last shelter was decided by the inhabitants, who selected their preferred place by voting.

Stops surrounded by plants not only look interesting. As explained by city authorities, they also bring greenery where it is needed - in places where you can wait for a means of transport.

The bus stop's vegetable roof lowers the temperature and makes waiting for the bus less painful on a hot day. It can also prevent up to 90% of the rain from falling on the roof during the year.

In addition, the rainwater collected under the bus stop is used to irrigate the green wall, which makes it self-sufficient. Greenery planted around the stop’s construction produces annually about 10 kg of oxygen and improve air quality by reducing pollution.

Green stops have surged in popularity as a response to the extreme heatwaves experienced in Europe last year. In December Brno (Czechia) installed its first public transport stops with green roofs, Utrecht (Netherlands) launched a biodiversification of scale installing 316 “bee stops” and inspired Amsterdam and Frankfurt (Germany) to test a similar solution.