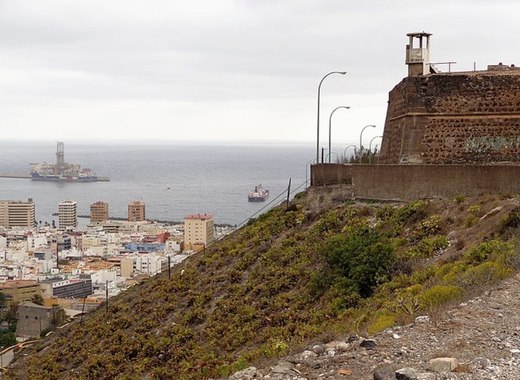 The largest defence fort in the Canary Islands, the Castillo de San Francisco, lays largely abandoned in its location high up in the residential quarter of San Francisco in Las Palmas de Gran Canaria. That is about to change, after Javier Doreste, City Councillor of Urban Planning and Nona Perera, General Director of the Heritage Department in the regional government agreed yesterday by a video conference on a three-stage plan of restoration and rehabilitation of the historical structure.

The project, which is slated to begin before the end of this year, is a good example of a collaborative effort between different levels and institutions of government.

The fortress in question, called El Castillo de San Francisco and also known as Castillo del Rey (King’s Castle) was built between 1601 and 1625 during the high age of the Spanish Empire and takes one back to the times of gold-filled galleons, cannons and pirates.

It has an irregular shape due to the uneven terrain it was built on and counts with an area of 5750 square metres, making it the largest of its kind on the archipelago. It used to be connected by walls to the Castillo de Mata and the Punta de Diamante platform thus creating a system of fortifications.

“For us, it is very important to recover this old military enclave because it can become the cultural lung that breathes a lot of life to the San Francisco neighbourhood, in addition, the military defence strategy of Las Palmas de Gran Canaria during the 16th and 17th centuries remains unknown and must become part of the city memory. It is necessary to study it, understand it and preserve it," said Heritage Director Nona Perera, explaining the importance of the Canary Islands as the midway point between the Old and New Worlds.

To that end, the restoration project will be divided into three phases. The first will include the cleaning of the area under the supervision of archaeologists. These experts will then take over in the second stage to carry out excavations and research. The final phase will see the rehabilitation of the fortress which will prepare it for the future uses.

The restoration is part of an overall project on part of the municipality for converting historical points into panoramic viewpoints.