The Mayor of Szeged cooks during decades-old culinary festival 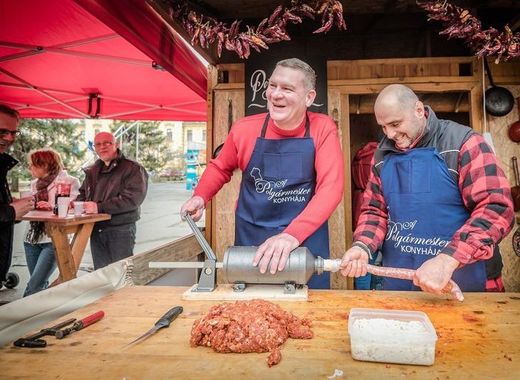 Following a decades-old tradition, a Mayor's Kitchen accompanied this edition of Toros Pálinka Festival in Szeged. This year, the Mayor of the Hungarian city László Botka prepared traditional roasted sausages and sausages with stuffed cabbage. Despite the dripping rain, many people attended the event to discover surprised the presence of the head of the city not on the stage with a microphone in hand, but behind the grill operating meticulously with kitchen tools.

During the traditional gastro cultural festival, many exhibitors offer their products. In addition to traditional smoked and dry goods, visitors can also taste specialties such as sausages made from African catfish, pálinka, wine, syrup, honey and cheese are also offered by the producers. It is also a tradition that on Saturday, amateur teams, groups of friends and companies present their cooking skills. The Mayor's Kitchen had more than 500 servings of stuffed cabbage and 500 loops and sausages. László Botka assisted actively in the preparation of meals before making a tour of the exhibitions by various teams. "It was all fine, let's start the division," said László Botka at 11 o'clock, and so began the allocation of tastings. It happened very quickly and as expected there was a huge line waiting to get to the loop and the sausage.