Today, despite numerous renovations, the origins are still visible 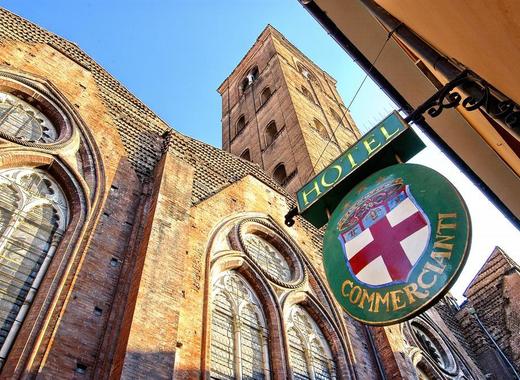 “Art Hotel Commercianti” boasts a centuries-old history closely linked with that of Bologna’s historical centre–never stagnant, but in continuous transformation. Its buildings, piazzas, and establishments are constantly have been constantly readapted and remodelled over the centuries, and yet regardless of this long history, the city continues to mirror the spirit of the Bolognese people of the past. The building was the original headquarters of Bologna City Council in the 12th Century. Although its current incarnation as a hotel dates back to the twentieth century, it was originally born as a tower house in the high middle ages, at the beginning of the eleventh century, when such fortified structures were built to resist the wear and tear of the times–as well as acts of hostility by enemies.

Even today, despite numerous renovations, the origins of this tower are still visible: on the exterior, the high compound pillar and the wooden trestles of the portico still support the original facade. On the inside, beams blackened by an ancient fire are still to this day integral to the entire building’s structure. The well dug deep into the subsoil is the same one that at one time supplied water to the inhabitants during sieges. What the owners have found over the course of various renovations bear witness to the life and activities of previous inhabitants.The charming hotel is located in the old tower in the city centre, in the shadow of Basilica S.Petronio, in Piazza Maggiore.