The Old Library in Dublin: a bewildering treasure of history and knowledge

See the impressive collection of the oldest books in Ireland 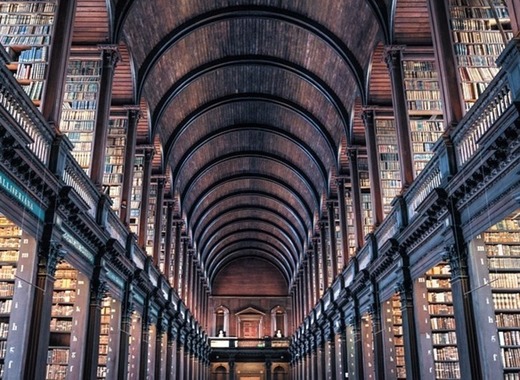 What is the first thing that pops into one’s mind when they hear Dublin, Ireland? Well, for most people it's probably the pubs where one can taste local whiskey and a pint of cold Guinness beer, or maybe it's the famous Dublin Castle - or at least that's what the top Google search results say. Yet, any visit to Dublin will remain incomplete, if one fails to visit a major cultural hub in the Irish capital: the Old Library of Trinity College, which has been keeping written records since the establishment of the College in 1592.

The Trinity College's library, the largest of its kind in Ireland, is home to a treasure that exceeds 6 million printed volumes, including a comprehensive title list of journals, manuscripts, music and tracks the history of academic research and evolution over the past 400 years, including the Book of Kells and the Book of Durrow. Despite its age or maybe even because of it, the Library continues to serve the needs of its thousands of visitors, all scientific fields of the College, as well as a wider international academic community through up-to-date resource discovery and teaching.

What is more fascinating about the library, however, is its exceptionally beautiful Long Room, located in the Old Library, belonging to the college. The main chamber is 65 metres long and boasts more than 200 000 copies of the oldest books in the Library on its shelves as well as a collection of historical pictures and documents, such as the Female register which depicts the history of female integration in higher education. Busts of Aristotle, Plato, Cicero, Homer, Socrates, Francis Bacon, John Locke, William Shakespeare (Peter Scheemakers), Edmund Burke ( John Hickey) and other prominent educated men also keep a vigilant eye on the impressive book collection.

Last but not least, here one can also find one of the few copies of the Proclamation of the Irish Republic of 1916. The harp made of oak and willow is emblematic for Ireland and is arguably one of the oldest in the country.