The Philosophical Eurovision comes to Porto

The show seeks to introduce critical thinking in entertainment 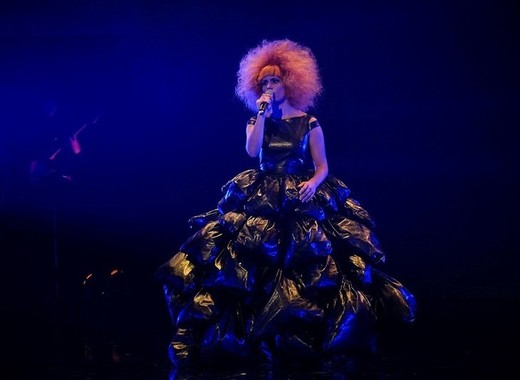 Everyone was familiar with Eurovision – the annual song contest where representatives from all over the continent compete in a show famous for its glamour, pizzazz and scenic excess. Now it has found its alternative image in the form of the Philosophical Song Contest, which is a stage spectacle created by the Swiss Massimo Furlan and Claire de Ribaupierre. Today and tomorrow, 2 and 3 October it comes to the Grande Auditório do Rivoli in Porto where curious viewers will be able to see what it is all about.

The creation of the show departed from the idea that the real Eurovision is more concerned with form than with content, a fact that is reflected in the consumption and creation of pop music today everywhere.

In fact, the commentary here is that critical thinking has gradually disappeared from today’s public discourse, something that we see with the rise of populism, in favour of easy entertainment. What the show’s creators want to do is invert this using the “Trojan horse” method.

That means introducing intellectual discourse under the familiar form of pop entertainment. Just like with the real Eurovision, performers will come to the stage and sing a song accompanied by a light show, but the catch is that the lyrics to all the songs have been written by contemporary philosophers, anthropologists and other thinkers.

All 11 songs presented have been written in the original language of the intellectual and will be presented with subtitles for the public. The Portuguese song, for example, was written by José Bragança de Miranda, a professor of sociology and researcher at the New University of Lisbon.

The jury will also be composed of intellectuals who will discuss the meaning and merits of each song after it has been performed. And just like Eurovision the audience will participate and vote to decide on who the winner of the contest will be.

The show is opened to people over the age of 14 and tickets cost 12 euros.